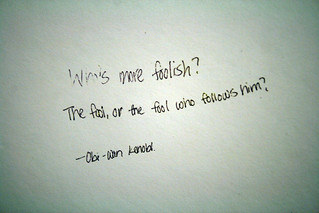 ■ All good bloggers should all take the opportunity for introspection provided by Proverbs 18:2:

2 Fools find no pleasure in understanding
but delight in airing their own opinions.

A relevant quote from Obi-Wan Kenobi is our pic of the day.

■ P.J. O'Rourke writes at his new American Consequences gig on (wait for it…) The Next Presidential Campaign. Start drinking early:

Get ready for a lot of lying.

The Democrats will have a more rich and varied set of lies to tell. These lies will be, per Mencken, in the form of worthless promises to the electorate.

The "per Mencken" to which he refers is a quote worth copying:

The government consists of a gang of men [who]… have only a talent for getting and holding office. Their principal device to that end is to search out groups who pant and pine for something they can’t get, and to promise to give it to them. Nine times out of ten that promise is worth nothing. The tenth time it is made good by looting A to satisfy B. In other words, government is a broker in pillage, and every election is a sort of advanced auction sale of stolen goods.

That was in 1936. Today things are different, because we'd have to add "and women" to that first sentence.

■ At Power Line, John Hinderaker writes that of ominous news: Democrats Revive the “Trickle Down” Smear. Quibble: to say it's "revived" would imply that it was moribund at some point. I don't think so. But Hinderaker's right that they currently want to turn the volume on that particular fallacy back up to 11. And they're getting plenty of help from the media. Chairman of the Council of Economic Advisers, Kevin Hassett's answer to a hostile query is worth quoting:

So trickle-down economics is something that, I guess, people who criticize the idea that taxes affect the economy will use to characterize approaches like the one that we’re pursuing. But I don’t think the idea that’s celebrated by even the non-partisan staff of the OECD — that if you have lower marginal rates, you get economic growth — is voodoo economics or controversial at all.

And yeah, the fact is that countries around the world have cut their corporate rates and had broad-based reforms, like we’re doing on the individual side, and then seeing economic growth result.

I don’t think there’s anybody who thinks that you’ll get no growth or negative growth for this. Maybe there are a few people. But in every economic model I’ve seen, you get growth — either a lot of growth, or sometimes if it’s a closed economy model, a little growth. But you get positive growth out of this. And that growth will benefit workers, and let’s talk about that.

So, right now, the way a U.S. firm avoids U.S. tax is they locate activity, say, in a country like Ireland instead of here. And so if you build a plant in Ireland, then you can sell the stuff back into the U.S. And when you sell the stuff back into the U.S., then it increases the trade deficit and doesn’t do anything for American workers, but it does increase the demand for Irish workers and drive up their wages.

And so what the President wants to do is cut the rate to 20 percent and build guardrails around the tax code so that people can’t transfer price — everything to Ireland anymore. And if we do that, then the people who benefit will be the workers here in the U.S. who have increased demand for their jobs.

Actually, it's the Democrats who want you to think that the Federal Government vacuuming up ever-increasing amounts of tax revenue will somehow trickle its way into your pocket, or something. Instead, it kind of pools up where a cynic would expect. Of the 25 wealthiest counties by median household income, six are in Maryland, and five are in Virginia. (See Mencken quote above for an explanation if necessary.)

Tonight, New Hampshire Democrats will hold their annual dinner at which they honor two womanizing philanderers, one of whom was accused by multiple women of sexual assault, including rape. The annual Kennedy-Clinton dinner will take place in Hollis and Democrats don’t seem to have any issues with revering these men, even during heightened allegations across the country about women who have been sexually assaulted by politicians and men of power in their beloved Hollywood.

Democrats changed the name of the dinner last year because they felt the Jefferson-Jackson dinner didn’t send the right message due to both men having been slave owners. Apparently, abusing women in modern times is perfectly acceptable to the New Hampshire Democrat Party.

All four of New Hampshire's Congressional delegation, all female, were in attendance. No doubt with frozen smiles on their faces.

My suggestion, left at GG, is to ridicule Democrat hypocrisy as necessary. I've done my part:

Did you have a nice time at the Kennedy-Clinton dinner?

■ And a certain amount of ridicule is fun, and probably necessary, but let's not go too far, as @JonahNRO's G-File for the week reminds us: That ’90s Show.

But […] there’s a downside to all the gloating on the right. When people change their minds and accept your position, pelting them with rotten cabbage is not necessarily the best response. As a general proposition, it’s a good thing when people in the wrong “flip-flop” to the right position. If my kid starts cleaning up her room without being asked, I’m not going shout, “Hypocrite!” at her. I understand that the political climate makes that more difficult, given that there really is more than a little cynicism at play. But I think it’s worth keeping in mind.

Again, see the Proverb up at the top of today's post. Don't be a fool.

■ But, again with the gloating, from Michael P. Ramirez.