… needs you more than wants you, and wants you for all time. 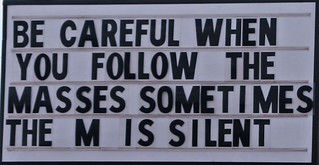 ■ Obvious good advice from Proverbs 19:27. Maybe a little too obvious, edging over into banal truism:

27 Stop listening to instruction, my son,
and you will stray from the words of knowledge.

■ At Reason, A. Barton Hinkle notes that, to his Progressive friends, Money in Politics Apparently Isn't So Bad When Democrats Win.

Political experts have cited many reasons for Democrat Ralph Northam's huge win in Tuesday's elections. Credit has gone to the state's changing demographics. And to high voter turnout. And to loathing for Donald Trump, which helped drive turnout. Some on the right blamed Republican Ed Gillespie not being Trumpian enough.

One explanation was conspicuous by its absence, however: money.

In the closing weeks of the campaign, Northam enjoyed a 2-1 advantage in financing: He went into October with $5.7 million in his pocket, compared to Gillespie's $2.5 million. By the time the polls closed, Northam had spent $32 million to Gillespie's $23 million.

ABH notes further a certain disparity in the way things are covered:

The difference in scrutiny is revealing, in the same way that frequent references to "the gun lobby"—but never "the abortion lobby"—are revealing. When conservative or libertarian groups support a Republican candidate, it's proof that the candidate is "in the pocket of" powerful and nefarious interests who have "bought and paid for" her support. When liberal or progressive groups contribute to a Democratic candidate, it's proof that the candidate's principled stand on important issues has earned the support of ordinary people who share her values.

Hinkle's linkles are interesting, restricting searches for those phrases to the NYT: as I type, "gun lobby" gets 1520 hits, "abortion lobby" gets 57.

Ironically (or is it), a similar hit count disparity is shown if the search is restricted to reason.com.

The hit counts are nearly equal at nationalreview.com.

Many liberals point to the rising price tag of American political campaigns to support calls for campaign finance reform.

According to Sen. Bernie Sanders, I-Vt., and many others, the billions of dollars donated to political campaigns by individuals and corporations amount to “legalized bribery” on the part of big corporations and the super-wealthy.

But constraining private citizens’ ability to fund political speech would not empower the average citizen. Instead, one of the major beneficiaries would be nationwide media conglomerates and their wealthy owners.

Neither York nor I want to tell NBC who they are and are not allowed to interview during a football telecast. But Progressive calls for "campaign finance reform" are largely about cementing in Progressive advantages in getting their mugs on-air in "friendly" situations.

■ @kevinNR has a suggestion you've seen here before: End the Visa Lottery.

The diversity lottery is emblematic of our wrongheaded thinking about immigration. Here’s the way it works: Countries that have sent lots of immigrants to the United States (more than 50,000 over five years) are put on an exclusion list, and the rest of the world gets to enter an immigration sweepstakes in which first prize is an immigration visa for the United States. Those are much coveted, because there aren’t a lot of other ways for people who do not already have family in the United States or highly prized work skills to immigrate. So, Canadians are out of luck, along with Mexicans, Colombians, Vietnamese, Indians, and those pesky Englishmen who have for generations been packed into the squalid Anglo-Saxon ghettos that mar so many of our otherwise fair cities with their tea and cricket and ironic diffidence.

Not to mention the stiff upper lips.

But Kevin's right: the "diversity lottery" serves no compelling American interest. Junk it. Yesterday, if possible.

■ At the College Fix, Coy Westerbrook got Knox College administration and faculty to open up about their cancellation of "The Good Person of Szechwan", a play centering around a Chinese hooker sex worker: College leaders defend decision to cancel play after students criticized it as ‘racist’.

Mainly notable for the quotes, for example from Elizabeth Carlin Metz, chair of Knox’s theater department:

“I believe that academia needs continually to be vigilant about the shifting nuances in addressing sensitive texts,” Carlin Metz told The Fix. “I think we must put them in our syllabi and on our stages so that we can interrogate our assumptions and examine our past in order to understand [our] present…We need to acknowledge privilege in all sectors and the inherent bias that ensues. And we all need to listen.”

Prof Carlin Metz, master of academic bafflegab. From the "General Interests" of her faculty page:

"As a stage director in both the profession and academia, I am most stimulated and delighted by theatre that is visceral, provocative, and challenging. While I am interested in all forms of theatre, I am most drawn to contemporary non-traditional theatre that explores the human condition. I seek to integrate physical theatre techniques with more traditional Western theatre practices so as to discover new levels of expressiveness and meaning in theatre of all styles and genres and, thus, in the world."

Provocative, but not as provocative as "The Good Person of Szechwan".

■ LFOD alert: Our state's local cell of Commie Radio takes a look at You Asked, We Answered: Why Doesn't Everyone Wear Seat Belts in N.H.?. The NHPR comrade queried Russ Rader at the Insurance Institute for Highway Safety.

I explained to Russ that we have, as a state, collectively considered passing seat belt laws in the past and decided we preferred that the government just stay out of it. I asked him what he thought of that line of reasoning.

“Well, it works,” he said, referring to seat belt legislation.

“The motto ‘Live Free or Die’ may be ingrained in the culture of the state, but people are dying needlessly because of lack of belt use," Russ said.

"We could be saving a lot of lives if people were required to buckle up.”

What Russ doesn't mention is that we could be saving a lot more lives with all sorts of other laws. Alcohol prohibition, this time with real teeth! Mandatory helmets for passengers and drivers! 25 MPH speed limits everywhere!

Today, the U.S. Supreme Court took a critical first step in protecting the First Amendment right of pro-life pregnancy care centers to speak to their clients free from government coercion.

At issue is a California law requiring those centers to notify all comers of possible "free or low-cost access" to, among other things, baby-killing services. And there's an LFOD connection:

So, good luck with that. Kennedy's still on the SC, so I'm not optimistic about their chances.