Ohmigod, It's Full of Links! 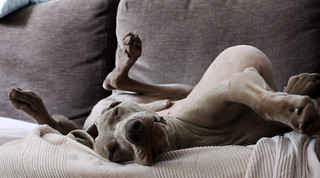 23 The fear of the Lord leads to life;
then one rests content, untouched by trouble.

Not to complain, but … OK, never mind that, I have a complaint: you are not untouched by trouble, you do not rest content, and you point this out to the Proverbialist, and what does he say?

"You must not have been doing it right, the 'fear of the Lord' thing. Keep trying."

■ Hey, kids, what time is it? According to Daniel Payne at the Federalist: It’s Time For Gun Controllers To Put Up Or Shut Up.

Perhaps the chief problem with the U.S. gun control movement is that its proponents seem to have no idea what they want. Few areas of American public policy debate are as fact-free and as devoid of substantive meaning as the repeated and seemingly endless demands for more gun laws.

"More" is quite easily transformed into "never enough". Payne urges would-be gun-controllers to just be honest about their ultimate goals.

No, I don't see that happening either.

■ You can read a lot of subtext into this NYT story: After Night of Drinking, F.B.I. Supervisor Wakes to Find a Woman Stole His Gun.

An F.B.I. counterterrorism supervisor is under internal investigation after a woman stole his gun following a night of heavy drinking in a North Carolina hotel, according to documents and government officials.

In July, Robert Manson, a unit chief in the F.B.I.’s international terrorism section, had his Glock .40-caliber handgun, a $6,000 Rolex watch and $60 in cash stolen from his room at the Westin hotel in Charlotte, N.C., according to a police report.

According to the story, alcohol was involved! Manson and others "had been drinking with women who said they were exotic dancers." And Manson was (reportedly) still "incapacitated because of alcohol" at 6:30 the next morning.

And I'm still parsing that bit about the $6K Rolex.

So: incompetent, overpaid, morally compromised. The FBI seems like a swell outfit.

■ Speaking of "incompetent, overpaid, unfit", @kevinNR writes on Our Tarnished Media, teed off by one of the tarnishers:

Dan Rather, in a recent interview, says he is worried about the political culture and the bitter divisions within it. I wonder whether he has considered his own unique personal contribution to the bitterness and hysteria of our political discourse.

Donald Trump would have a great deal less credibility dismissing every reality he does not like as “Fake news!” if Dan Rather had not infamously attempted to peddle some actual fake news for the transparent purpose of trying to hurt the presidential campaign of George W. Bush. Rather’s attempt to use forged documents to push a fake story about a Republican candidate for political purposes did more than any other single episode of the past 20 years to undermine the credibility of the mainstream media.

It is a sign of our sick political culture that Dan Rather was not shunned into ignominy 13 years ago.

■ Reason's Ronald Bailey notes that Public Health Nannies Want to Stop You From Boozing. Why? Because Cancer.

Now come the doyens of the American Society of Clinical Oncology (ASCO) with their statement on alcohol and cancer. ASCO cites research estimating "3.5 percent of all cancer deaths are attributable to drinking alcohol" in the United States. That would mean some 21,000 of the 596,000 Americans who died of cancer in 2016 were killed by cancers associated with alcohol consumption. In comparison, smoking tobacco is estimated to cause 32 percent of all cancer deaths (about 120,000 deaths).

And the nannies (unlike gun controllers, see above) are not shy about recommendations:

The group treats consuming alcohol as a pure public health problem to which the only solutions are various forms of prohibition. They recommend regulating alcohol outlet density; increasing alcohol taxes and prices; maintaining limits on days and hours of sale; enhancing enforcement of laws prohibiting sales to minors; restricting youth exposure to advertising of alcoholic beverages; and resisting further privatization of retail alcohol sales in communities with current government control.

At least they're honest prohibitionists.

■ But our Google LFOD alert was triggered by (of all things) a non-prohibitionist review of a Pinot Noir offering [2015 vintage pictured at your right], written by Jim Beauregard, the Union Leader's wine guy:

So, I was gearing up to write about a big bold red to pair with this chilly season of storms, wind, rain, power outages and so forth, but I was breezing through Harvest Market last week and came across wine that I haven’t written about for a few years — Peter Paul Pinot Noir.

Peter Paul, you may know, is a New Hampshire native, and yes, if you look at the bottom of the label you will see it: “Live Free or Die.” The benefactor for whom UNH’s business school is named, Paul is currently the head of Headlands Asset Management in California, and while still working in the financial industry, his passion for wine remains undimmed.

Anyway: A bottle of the pinot will set you back $22.99 at New Hampshire's fine liquor and wine outlets (on sale this month). Unavailable in the Dover and Somersworth locations, but the big store at the Portsmouth Traffic Circle has 9 bottles in stock as I type.

But is it any good? Here's Jim:

This is a fairly dark Pinot Noir, purple heading into ruby overall, with a clean and refreshing nose of medium intensity that presents delightful aromas of raspberry, and with a little air, strawberry as well. On the palate, it presents itself as a developing wine, dry, with medium acidity, tannin that’s fine-grained and blends well, as well as alcohol at 14.2%. Medium body and medium-plus flavor intensity that run from fruit to some oak hints. The flavor profile includes raspberry, following the nose, but also strawberry, red plum, a slight earthiness and some slight hints of cedar that come and go over the finish, which is long and pleasing.

But the big question for me: will I be able to tell any difference between this and the 15-bucks-for-a-five-liter-box plonk I usually buy?