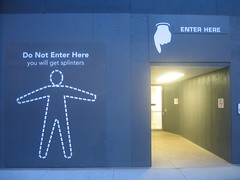 20 Listen to advice and accept discipline,
and at the end you will be counted among the wise.

On the other hand, ignore advice and discipline, and become President of the United States of America. Your call.

■ Speaking of advice, James Bovard [at USA Today] has some for you Facebookers: Facebook censored me. Criticize your government and it might censor you too.

Facebook blocked a post of mine last month for the first time since I joined it nine years ago. I was seeking to repost a blog article I had written on Janet Reno, the controversial former attorney general who died last year. I initially thought that Facebook was having technical glitches (no novelty). But I checked the page and saw the official verdict: “Could not scrape URL because it has been blocked.”

Bovard's thoughtcrime was to use a photo (viewable here at Texas Monthly) showing the Branch Davidian compound in Waco in flames.

■ And if you're saying, "OK, that's Facebook. But Google's OK, right?" Well… Mytheos Holt [at the American Spectator] would tell you no: Google Can No Longer Be Trusted With Private Data.

The facts are as follows: In the past week, multiple journalists — ironically, not conservatives — reported that they’d gotten locked out of projects they were working on using Google Drive, Google’s cloud storage service. Mark DiStefano of Buzzfeed UK reported the news, and later reported on Google’s “apology” for it, via Twitter. Google explained, “This morning, we made a code that incorrectly flagged a small percentage of Google Docs as abusive, which caused those documents to be automatically blocked. A fix is in place and all users should have access to their docs.”

Yes, if you store stuff at Google Drive, the Googlebots will check it out for "abusive content". Creepy!

■ Candidate for the "Longest Book Ever Written" award: Things Donald Trump Doesn't Understand. But if you take them one at a time, like Robert Tracinski [at the Federalist], it might be manageable: Donald Trump Doesn’t Understand Why We Don’t Have One-Man Executive Rule

It looks like this is going to have to be the era of the civics lesson, because nobody can be bothered any more to gain a basic knowledge of how our government is supposed to work and why it was designed that way. Not even the president of the United States. I know this isn’t going to surprise anyone, but that’s the takeaway from two recent interviews with Donald Trump.

In one, Trump expresses frustration that the FBI and the Justice Department are not putting Hillary Clinton in jail already, just as he promised during one of his debates with her during his campaign last year. He said then that he would instruct his attorney general to prosecute her, but he is now finding that it’s not so simple.

The other example: Trump boasted to sympathetic Laura Ingraham that he "instructed Congress" to get rid of the "Diversity Lottery". As Tracinski notes, that's not how it works.

New London, New Hampshire, a community of 4,400 is not bursting at the seams with doctors. Nevertheless, there may soon be one fewer, thanks to state regulators.

The state's Board of Medicine has taken away 85-year-old Anna Konopka's medical license, and they're resisting her efforts to get it back.

Although the case is not clearcut, Schackford indicates that a large amount of the state's problems with Dr. Konopka might be due to her unwillingness to participate in the opioid prescription reporting program.

■ John Hinderaker at Power Line notes the Fake News About Koi: Why No One Trusts the Press

But of course, in the eyes of the liberal media, the president must never be allowed a success of any kind. So the press invented a “gaffe” for Trump. At one point during his visit, Trump and Abe both fed koi, i.e., Japanese carp. Big deal. But reporters ridiculed the president for ultimately dumping the remainder of his box of food into a pond. CNN, in particular, went nuts on this theme. It is hard to imagine anything more trivial, but for the press, no opportunity to smear President Trump can be foregone.

Initial deceptive editing and reporting of the "gaffe" was eagerly echoed by trusting fools whose Trump-hatred overrode any normal healthy skepticism.