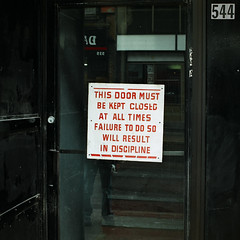 18 Discipline your children, for in that there is hope;
do not be a willing party to their death.

It's too late for Mrs. Salad and me, but if you're looking for advice on parental discipline, I'd go to Bryan Caplan. Sample:

If parents want a happier life, they need to rethink the justification for discipline. The welfare of the child is one legitimate goal. If your toddler runs into the street, zero-tolerance really is for his own good. But the child's welfare is only the beginning. Another legitimate function of discipline is to keep the child from abusing the people around him - and no one is more susceptible to a child's abuse than his own parents. Your kid knows where you live. You're stuck with him, and he knows it. He also knows that you love him, so you're inclined to forgive him his trespasses. Armed with these advantages, your child can make your life awful - unless you stand up for yourself.

I wish I'd read that 30 years ago. Not that we did poorly, our kids turned out fine. But there would have been fewer bumps in the road, I think.

That response is fundamentally misguided because the narrative endorsed by the commission is wrong in several crucial ways. Doctors did not mistakenly believe that the dangers posed by opioids had been greatly exaggerated. They correctly believed that the dangers posed by opioids had been greatly exaggerated, and they were right to think that excessive fear of opioids had led to inadequate pain treatment. Contrary to the impression left by a lot of the press coverage, opioid addiction and opioid-related deaths rarely involve drug-naive patients who accidentally get hooked while being treated for pain. They typically involve polydrug users with histories of substance abuse and psychological problems. Attempts to prevent overdoses by closing off access to legally produced narcotics make matters worse for both groups, depriving pain patients of the analgesics they need to make their lives livable while driving nonmedical users into a black market where the drugs are more variable and therefore more dangerous.

Sullum is pretty convincing. We are in for—quite literally—a world of hurt. Thanks to our "eek, do something" frenzy, our pols go for the easiest target.

■ At NRO, Jay Nordlinger is wise on tax policy: Flat’s Where It’s At.

It’s not just that the government has its thumb on the scale. It’s that it’s jumping up and down on the scale with its whole large body. We conservatives are often complaining about “social engineering.” A lot of us are willing to be engineers, when it comes to tax policy.

I have a dream, sort of (not to belittle the great dream of civil rights for all Americans): a flat tax with no exemptions — for home, children, charity, what have you. You’re taxed at some reasonable, and reasonably modest, percentage. And what you do with the rest is your own business.

Jay's voice is refreshing, amidst all those folks who are mad because their ox is being gored by the GOP's proposed tax legislation.

City leaders have decided that the Manchester city flag needs a reboot.

What, why? Also: Manchester has a flag? Yes, you can check it out at the link.

Too many pictures, including a misplaced waterfall and some kind of an outdated tool that only 19th century STEM students would recognize.

I don't know about the waterfall, but that's a governor.

Too many words, including a Latin phrase that only 19th century humanities students could decipher.

The phrase is "Labor Vincit", which even I, with two years of Latin about 50 years ago could translate: "Work Wins". (Hayward provides a more lofty version: "Hard work prevails." Mrs. Cunningham would also find that acceptable.)

But let's get to the LFOD meat and potatoes:

Hard work. Is that all Manchester can say for itself? In a country whose motto is “In God We Trust,” and a state whose best-of-all mottos is “Live Free or Die,” Manchester’s highest valor is in bustin’ our humps for the boss?

Excellent point. I don't care—sorry, Mancunians—about the flag, but that motto needs fixing. How about Concordia delenda est?