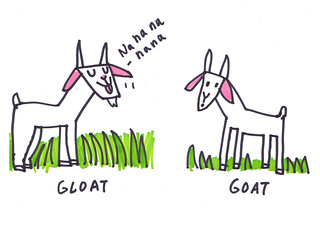 ■ Well, now that the FCC HAS DESTROYED THE INTERNET, you're probably not reading this, and I probably haven't published it. Or something.

Seriously. Get a grip, people.

■ We know that the Proverbialist despises mockers, and he displays that once again in Proverbs 17:5; but he goes after gloaters too:

5 Whoever mocks the poor shows contempt for their Maker;
whoever gloats over disaster will not go unpunished.

I, for one, will not give up my right to say "I told you so." If that brings divine punishment, so be it.

■ American Consequences' P. J. O'Rourke turns his eye onto American Consumer Trends. One of the things we're buying: calories. And…

How did Americans get so huge? Rhetorical question. Drive down any commercial strip. Where there was a diner, a White Castle, and a truck stop there is now…

Americans not only look gross but they dress the part. We’ve become a nation of immense 9-year-olds dressed for all occasions in T-shirts, shorts, and Tevas. Or, sometimes, just to change things up, pajama pants, sports bras, and wife-beater shirts.

■ Daniel J. Mitchell is Grading the House-Senate Republican Tax Plan. Spoiler: his grade on the current proposal is B. But:

Aficianados of “public choice” are painfully aware that politicians and interest groups are depressingly clever about preserving their goodies. So while it seems like tax reform is going to happen, it’s not a done deal. When dealing with Washington, it’s wise to assume the worst.

So I am "cautiously pessimistic".

■ If you are a political journalist, and you've been wondering who to blame for your sinking credibility, David Harsanyi has your answer right here: Political Journalists Have Themselves to Blame for Sinking Credibility. After listing four "big scoops" that turned out to be… wrong:

Forget your routine bias. These were four bombshells disseminated to millions of Americans by breathless anchors, pundits and analysts, all of whom are feeding frenzied expectations about Trump-Russia collusion that have now been internalized by many as indisputable truths. All four pieces, incidentally, are useless without their central faulty claims. Yet there they sit. And these are only four of dozens of other stories that have fizzled over the year.

If we are to accept the special pleadings of journalists, we have to believe these were all honest mistakes. They may be. But a person might then ask: Why is it that every one of the dozens of honest mistakes is prejudiced in the very same way? Why hasn't there been a single major honest mistake that diminishes the Trump-Russia collusion story? Why is there never an honest mistake that indicts Democrats?

Even my beloved WSJ is mentioned. Oh, well, I'll just skip to the editorial pages a little faster.

■ I try to avoid obvious clickbait, but occasionally a headline just works. So it is with Wired: The Alabama Senate Election Was Decided 100 Million Years Ago. What?

They say victory has a hundred fathers, and Doug Jones' upset win in the Alabama Senate race Tuesday night is no exception. Maybe it was the mounting accusations of child molestation facing Republican opponent Roy Moore that sealed Jones' victory. Maybe this was just the latest swell in the blue wave that washed over Virginia last month. Maybe it was the work of a small, but mighty, group of Jones volunteers who ran an expansive ground game.

Or maybe, it was the ground itself—the literal soil underneath voters' feet, which was once submerged underwater, leaving behind a uniquely fertile strip of land on which human beings committed unthinkable atrocities, the effects of which are still being felt today.

If only Roy Moore had taken geology in college!

■ A bit of good news from the Fraser Institute, brought to us via my Google LFOD news alert: New Hampshire leads U.S. in economic freedom three years running.

For the third year in a row, New Hampshire—the Live Free or Die state—has the highest level of economic freedom among all U.S. states, finds a new report released today by the Fraser Institute, an independent, non-partisan Canadian public policy think-tank.

At the bottom: New York and California.

One of those things I thought would have gone out of vogue is apparently still in style in New Hampshire. The number of bullshit wiretap prosecutions brought against people recording cops has dropped precipitously over the past half-decade as courts have found use of wiretap statutes in this fashion unconstitutional, but over in the Live Free or Die state, the statute lives freely and dies even harder.

Your tax dollars at work, Mancunians.