A Harry Bosch novel with a large dose of Bosch's half-brother, Mickey Haller. As always, Michael Connelly grabs my attention and doesn't let go until the very last page. Can't say enough good things about him.

Here, Harry has obtained his private investigator license, so he's joining the ranks of Marlowe, Archer, Cole, and Millhone, going down the mean streets, the best man in his world, and a good enough man for any world. Even the book's title sounds one that Chandler might have used. And the initial premise recalls The Big Sleep: Bosch is summoned to the mansion of an aged tycoon! His gig is slightly different, though: the tycoon has a long-lost biological son, product of a late-1940's dalliance with a Mexican girl. Sensing his mortality, the tycoon now wishes to make things right, as best he can, by hiring Harry to locate the kid. And Harry is warned that people who would prefer that the heir not be found might resort to some nasty behavior to obstruct him.

That's one plot thread. In the other, Harry is volunteering his detective services to the city of San Fernando PD. San Fernando is a mere 2.37 square miles in area, completely surrounded by Los Angeles, mostly Hispanic population. Harry has linked together previously-unconnected rape cases to discover their common perpetrator, who the cops have dubbed the "Screen Cutter". The villain seems confident in his ability to perform his crime without getting caught. Which, of course, puts Harry's teeth on edge.

Technically, Harry's not supposed to use SFPD resources in his private investigation. Of course, he does anyway. 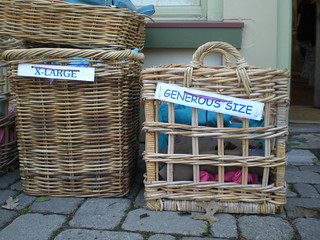 ■ Pun Salad housekeeping update: I've changed the "Archive" section over there on your right. It used to be a table of monthly links, each taking you to the posts made in the specified month. After nearly 13 years of blogging, it had expanded into around 150 links, and looked a little unwieldly.

I'm not sure if anyone will find it useful, but I think it looks a little better. Most importantly, I had some fun coding it all up.

And now on with our regularly scheduled programming…

■ After a couple nonsense verses, the Proverbialist returns to form with the straightforward Proverbs 18:22:

22 He who finds a wife finds what is good
and receives favor from the Lord.

■ At Cato, an encouraging title on a post by Alex Nowrasteh: The Use of Euphemisms in Political Debate.

Political debate in the modern world is impossible without memorizing a list of euphemisms, and there is no shortage of public opprobrium for those who talk about certain topics without using them.  In addition to the many euphemisms that are accepted by virtually everybody, the political left has its own set of euphemisms associated with political correctness, while the political right has its own set linked to patriotic correctness.  Euphemisms tend to serve as signals of political-tribal membership, but also as means to convince ambivalent voters to support one policy or the other.  Violating the other political tribe’s euphemisms can even help a candidate get elected President.  This post explores why people use euphemisms in political debate and whether that effort is worthwhile.

Note: The discussion uses immigration terminology for an example, and reflects Nowrasteh's own biases on that issue. That's regrettable, because the topic is important and could use an even-handed treatment.

■ Matt Welch, at Reason, is euphemism-free: Who's Ready for Some Trillion-Dollar Republican Deficits?

That's what the grumps over at the Committee for a Responsible Federal Budget (CRFB) are saying today. "By our estimate, a combination of tax cuts, sequester relief, and other changes would increase deficits to $1.05 trillion by 2019 and $1.1 trillion by 2020," the CRFB found (emphases in original). "Tax cuts and sequester relief alone would be enough to bring back trillion-dollar deficits by 2019, and tax cuts by themselves would bring them back by 2020."

Well, euphemism-free until he quotes someone else. "Sequester relief" means: undoing the legislation that mandates that government spending grow less rapidly than it would otherwise. [And—sigh—often that less-rapid growth gets inaccurately cacophemized as "spending cuts".]

Bryan Caplan has a new book coming out, and it's excerpted at the Atlantic: The World Might Be Better Off Without College for Everyone. Sample:

Those who search their memory will find noble exceptions to these sad rules. I have known plenty of eager students and passionate educators, and a few wise deciders. Still, my 40 years in the education industry leave no doubt that they are hopelessly outnumbered. Meritorious education survives but does not thrive.

Much more at the link. I plan on getting my hands on this book.

■ @JonahNRO is no Trumpkin, but he can recognize when Trump gets one right: Trump Puts Fact Ahead of Fiction in Israel.

Consider President Trump’s momentous (though for now mostly symbolic) announcement that the United States will recognize Jerusalem as the capital of Israel. Before you can debate whether this was a good move, you must acknowledge one glaring fact that the chatterers want to ignore or downplay: It’s true. Jerusalem is the capital of Israel. The Knesset, Israel’s parliament, convenes there. Israelis call it their capital for the same reason they claim two plus two equals four. It’s just true.

What makes the decision controversial is that everyone had agreed to pretend it wasn’t the capital in order to protect “the peace process.”

Talking about euphemisms, "peace process" is right up there. Who could be against it?!

■ But as Power Line's John Hinderaker notes: The “Peace Process” Ended Long Ago. That hasn't stopped the drumbeat from the Usual Media Suspects (Al-Jazeera, CBS, CNN, Time, …) to bemoan that Trump has killed it. I, like John, favor the 1000-word response from Michael P. Ramirez:

■ Good advice from Megan McArdle about "whataboutism": Don't Tune Out 'What About?' Bottom line:

Which ought to be, not “Who’s worse?” but “How can we make society better?” That will not be accomplished by deflecting accusations into an inquiry into the behavior of the accuser -- but nor will it be accomplished by allowing flagrant hypocrisy to pass unremarked. Allowing brazen hypocrites to demand social sanction (but only for others) does not uphold important principles; it destroys them. Both sides come to view principles merely as useful weapons -- and soon, they find that they are not useful even as weapons. As economist Garett Jones recently told me, “Two wrongs don’t make a right … but three wrongs make a social norm.” And “Do as I say, not as I do” is not a principle that any decent society should endorse.

… but, increasingly, that seems to be the prevailing mode of discourse these days.