Sensitive People: Maybe you should write a poem instead.

I like Clark Gregg. I liked him in The New Adventures of Old Christine, I liked him as Phil Coulson in all those Marvel movies and Agents of S.H.I.E.L.D.. And I saw his smirking face on the DVD box for this movie, and expected a light-hearted comedy that gently lampooned Hollywood and its denizens. (In addition to being the star—he's in every scene, I think—Mr. Gregg wrote and directed the movie.)

Oops. Maybe I should have read the plot synopses a little more carefully. Well, it never hurts to be surprised, I guess. The IMDB says "Comedy, Drama". I say, more like "Film Noir".

Anyway, the plot: Mr. Gregg is Howard Holloway, a "struggling" agent specializing in child actors, because he once was one. (We hear how his acting career got derailed late in the movie.) His efforts are often thwarted by the machinations of the relatively despicable people he has to deal with: parents, competing agents, conniving producers.

But, by luck, he happens on his Big Chance: an extraordinarily gifted 13-year-old actress, Lydia, whose drunkard father is schlepping her around to casting calls. Can Howard help start her out on a solid career and also maintain his soul?

I liked the movie. Mrs. Salad hated the ending, but (once I got the genre right) I kind of saw it coming. 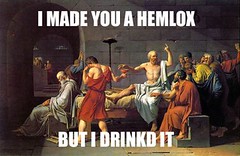 ■ Every so often the Proverbialist drops little hints that his home life isn't all he hoped it would be. We get another one of those in Proverbs 19:13:

13 A foolish child is a father’s ruin,
and a quarrelsome wife is like
the constant dripping of a leaky roof.

"When are you going to fix the roof, Elihu? What are you waiting for, the Messiah?"

■ At Reason, Robby Soave tells the tale: Philosophy Professor Tells Bisexual Student Who Criticized Islam 'We're Not Going to Let You Damage the Program'. Can't have that!

A bisexual male student at the University of Texas–San Antonio said during an informal conversation outside class that he was uncomfortable with Islam because people still receive the death penalty for being gay in 10 Muslim-majority countries.

For expressing this thought, the student—Alfred MacDonald, who no longer attends the school—was instructed to meet with the chair of the philosophy department, Eve Browning. Prof. Browning told MacDonald in no uncertain terms that he had committed the crime of "offending" someone, and she warned him that his habit of saying what he thinks could bring down the entire program. She threatened to call the Behavior Intervention Team and refer MacDonald to counseling. She did everything but send him to Room 101.

MacDonald (wisely) brought a recorder to the encounter, so there is a cringe-inducing transcript of the Browning-MacDonald interrogation at the link. It must be read to be believed.

Kid, you're probably better off learning philosophy on your own. Otherwise, it's only a matter of time before the faculty spike your punch with hemlock at the departmental Christmas party.

■ With everyone else concentrating on likely legal repercussions of the Paul Manafort indictment, @kevinNR has some larger observations on Swamp Things.

The usual Trump apologists spent yesterday afternoon eating up a great deal of AM-radio and cable-news airtime emphasizing that the crimes with which Manafort is charged do not relate to his work for the Trump campaign, but preceded it. Tighten in and focus on that word: preceded. It may be the case that Manafort did nothing wrong during his time as Trump’s campaign manager, but that does not mean that the indictment against him tells us nothing about the president or his campaign. It tells us a great deal: about his judgment, about his character, about the sort of people with whom he is comfortable doing business.

Drain the swamp? Trump & Co. are the Swamp Things.

■ Tom Nichols points out something that I would have thought to be obvious: Comparing Donald Trump To Ronald Reagan Is An Insult To Reagan.

Now that we’ve had nearly a year of the dingy, vulgar carnival that is the Trump presidency, conservatives and Republicans (who are not always the same people) have settled into various camps. Some, like me, remain committed Never Trumpers; whether inside or outside of the GOP, we feel that our worst predictions have been vindicated.

Others have thrown what few principles they once had onto the Trump bonfire, abandoning any pretense of conservatism in the name of tribal victory. They dance around the flames while chanting “But Gorsuch” and whooping about the anger they have elicited from their hated enemies in the media, the academy, and the people who shower before going to work.

But a third group has opted for denial. Having eschewed the dread of the Never Trumpers, but too respectable and thoughtful to join the Steve Bannonite ritual political theater of kilt-lifting and buttock-slapping in the face of the royal archery, they instead have chosen to see Trump as firmly in the tradition of modern conservative heroes like Ronald Reagan. No, really.

I don't like the "Never Trump" label, it lost meaning after the election. It might be relevant again in a couple years, though.

Understanding it as a shorthand for "Trump continues to be a lying narcissistic slimeball" might make more sense.

“Why do we keep doing this to ourselves?” Donna Bailey, a Democratic state representative in Maine and crusader against anachronistic and dangerous institutions, asked the Wall Street Journal (paywall). It’s an excellent question.

Earlier this year, Bailey sponsored a bill that would move Maine to the Atlantic Time Zone, an hour ahead of its current position in the Eastern Time Zone, and no longer observe Daylight Saving Time. The bill passed both chambers of the Maine state legislature. But the Senate added a provision that Maine voters must approve the change in a referendum, and the referendum could only be triggered by neighboring Massachusetts and New Hampshire changing their time, too. Since neither of those states had immediate plans to change their time zones, the move seemed doomed.

But now some people in Massachusetts are thinking about it too!

Ms. Schrager previously advocated that the US move to just two time zones back in 2013. At the time, Pun Salad advocated something even more radically crackpot (but also brilliant): The Right Number of Time Zones is Zero. It continues to make more sense to me than any of this other twiddling.

■ Woo, it's Halloween. I hate Halloween. But I like James Lileks, and he asks and suggests: Think you're scare-savvy? Try this Halloween quiz. Sample:

C) “It’s a naive Type O without any breeding, but I think you’ll be amused by its presumption.”

See how many you get right!

■ And the Google LFOD alert bell rang for a Union Leader article: Inventor Kamen urges Granite State businesses to support tech education. I don't need to tell you who Dean Kamen is; his message to a recent conference was to advocate New Hampshire as a high-tech Silicon Valley of New England via education and entrepreneurship.

The former New Yorker said the state’s motto, “Live Free or Die,” minted on its license plates convinced him to move here more than three decades ago. He urged the business people not to disappoint him.

What would (say) Maine need to put on its license plates to entice Kamen away? Switch from "Vacationland" to "TANSTAAFL", maybe? I don't see that happening.