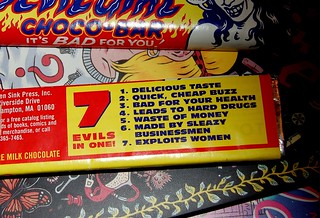 ■ Proverbs 19:9 prophesies doom for a large number of people…

9 A false witness will not go unpunished,
and whoever pours out lies will perish.

Anyone paying attention to the news must be getting impatient for this retribution to occur. Any day now! (Not that I wish any politician, diversity educator, or MSM journalist ill, of course.)

■ Ann Althouse is peeved with Newsweek for its breathless story on [Chinese] kids today, with the lede: "Young people in China are rejecting Communist party propaganda for Western-style movie stars and celebrity culture...". Ms Althouse is ruthless.

"... that’s the lesson behind the box office flop of a series big budget propaganda films according to observers. When the movie 'Founding Fathers of the Army,' which tells the story of the founding of the People’s Liberation Army, recently hit cinemas, officials hoped it would inspire an outpouring of patriotic feeling — instead it was mocked for trying to use popular film stars to lure younger viewers."

Or so Newsweek tells us. No details of this mockery appear in the linked story. I see that the movie was a "flop" in relation to its "big budget," but there are no numbers, and who knows what constitutes a "flop" or a "big budget" when the proportions are Chinese? Assuming it was a flop, how do we jump to the conclusion that the young people of China long for a Western-style culture? What's the evidence of that? Maybe the movie was boring.

In other words, Newsweek gives us one of those stories that makes you feel dumber for having read it. (But Ms. Althouse's article led me to today's picture du jour.)

■ Megan McArdle offers good advice, not that anyone is likely to take it: Be Careful Who You Call a 'White Supremacist'

“The NFL Protests Are a Perfect Study of How White Supremacy Works” reads the headline on a recent article at the Root. Which is confusing if you think of “white supremacy” as an apartheid system like Jim Crow, and “white supremacists” as angry people running around in sheets and hoods. The Root's looser use of “white supremacy,” to describe something considerably less explicit than advocating a race war, has become increasingly common.

has now no meaning except in so far as it signifies ‘something not desirable’.

Orwell filled in the blank with "The word Fascism". Today, "The phrase white supremacy" also fits.

■ @JonahNRO tells us the brutal truth that the latest revelations about the "Steele Dossier" just confirm further: The Clintons Are Just Not That in to [sic] You. Yes, yes, there were lies. But:

But the lies were always a symptom of a deeper pathology. The Clintons saw themselves as better than the institutions they were supposed to serve, from the White House and the State Department to the Democratic party and even the country. The rules are for other people. That’s why Clinton Inc. collected millions upon millions of dollars from foreign governments, Wall Street, and Hollywood while demonizing their opponents as shills for corporations and wealthy interests. That’s why Hillary flouted the rules for her email server. That’s why Bill flouted the rules for pretty much everything.

And at every step, they expected others to protect them, lie for them, clean up after them, and, if necessary, go to jail for them.

Not to harp on this, but… OK, I am harping on this: People are (correctly) cheering Jeff Flake for his honest criticism of Trumpian coarseness and indecency. When will an equally brave Democrat start taking on the Clintons?

■ Peter Suderman has good advice for any Congresscritter willing to take it: For Congress, the Best Deal on Obamacare May Be No Deal At All.

What would a compromise deal on health care actually look like? Following President Trump's decision to cut off funding for insurers under Obamacare, lawmakers are struggling to work out a legislative response. The best outcome for everyone may turn out to be doing nothing.

Suderman finds the Alexander/Murray bill too lopsided in favor of ObamaCare supporters. And competing proposals that are less tilted face the same problem we saw earlier this year: it's hard to get Republicans to agree on what "repeal and replace" means.

■ The United Nations is promoting "Sustainable Development Goals", and has emitted a report (primary author is Jeffrey Sachs, Columbia econ prof) ranking countries on how they're doing with that. Daniel J. Mitchell summarizes: According to Bizarre Rankings from Jeffrey Sachs, Cuba Scores above the United States for Achieving the U.N.’s “Sustainable Development Goals”. Pardon the scatalogical language, but how far up one's ass one's head must be to arrive at that result? Here's example one:

For the first goal of “no poverty,” the report includes a measure of income distribution rather than poverty. This is same dodgy approach that’s been used by the Obama Administration and the OECD, and because almost everyone is Cuba is equally poor, that means it scores much higher than the United States, where everyone is richer, but with varying degrees of wealth. I’m not joking.

Why it's almost as if the UN and Sachs were tilted toward statism.