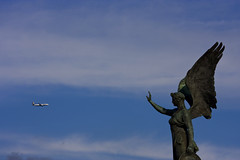 11 Even small children are known by their actions,
so is their conduct really pure and upright?

"They tromp on my lawn. And their music? It's just noise!"

■ One of Reason's first editors, Robert W. Poole, has long been an acknowledged expert on transportation policy. He returns to the pages of the magazine with a (frankly infuriating) look at the USA's socialistic and antiquated Air Traffic Control system: Your Flight Is Delayed.

Amid the staggering number of political and policy controversies to roil Washington this year, one of the most significant has—forgive me—flown under the radar. It's a battle that will determine the future of the United States air traffic control (ATC) system. And while the particulars may seem esoteric, the consequences could be huge.

Every time you board a plane, you are putting yourself at the mercy of an inefficient system guided by 1930s radio beacons, 1950s radar surveillance, and paper ticker-tape flight tracking. Far from being the envy of the world, the U.S. system for guiding aircraft is a backward analog relic in a digital age.

■ Also from Reason, Damon Root recalls another centennial: When the Government Declared War on the First Amendment.

One hundred years ago, the U.S. government declared war on the First Amendment.

It all started with President Woodrow Wilson. On April 2, 1917, Wilson urged the nation into battle against Germany in order to "make the world safe for democracy." But the president also set his sights on certain enemies located much closer to home. "Millions of men and women of German birth and native sympathy...live among us," Wilson observed. "If there should be disloyalty, it will be dealt with with a firm hand of repression."

President Wilson, Democrat, Progressive, Racist, Autocrat. He was worse in actuality than President Trump's most vehement critics imagine Trump might be.

If you’re an NFL fan, you can only be aghast at what Trump has done. His side — our side, the side that said you shouldn’t insult the flag because of the mistakes made by some police officers — was winning. All Trump had to do to secure this small but important victory was keep his mouth shut. Kaepernick had suffered the twin humiliations of being forced to recant his position last spring by promising to end his pregame protests and being snubbed by every NFL team this summer, which left him free to spend the opening weeks of the season protesting injustice from his couch. Copycat demonstrations were dwindling out.

Now, thanks to Trump, Sunday brought the spectacle of more dismaying national-anthem protests than ever before. Players were taking a knee from coast to coast. We were presented with the mind-boggling spectacle of Patriots players being booed by Patriots fans for being unpatriotic.

"All Trump had to do was … keep his mouth shut." Why, that reminds me of a song!

■ Gregg Easterbrook writes Tuesday Morning Quarterback, the football column you can read even if you don't care much for football. This week:

First let’s bear in mind that Trump was the man who drove the USFL into the ditch, costing fans an alternative to the NFL football monopoly and investors hundreds of millions—about a billion of other people’s money lost, converted to current dollars. Trump is a failure as a manager of a professional sports league, and now lashes out at others who are able to do what he could not. One need not hold an advanced degree to diagnose this as a mental health concern.

Trump’s invective against football players who won’t stand to salute the American flag, and against NBA players who criticize him, seemed—and here’s another un-credentialed psychological opinion—pure narcissism. His goal is to focus all attention on himself, and he succeeds with Twitter-storm after Twitter-storm. Through the weekend, sports fans, the commentariat, and star athletes talked Trump, Trump, Trump. So from his standpoint, the president’s deranged observations were a total success. Anything that focuses attention on Trump is, to Trump, a success. The public good? The national interest? Fuggedaboutit.

Also in the TMQ column this week: a hilarious list of New York Times corrections over the past few years.

■ But conservatives in search of a politically correct sport don't have far to look. NASCAR owners side with Trump, take firm stance against anthem protests. In fact, it was just up the road a bit at the New Hampshire Motor Speedway in Loudon:

On the day Jacksonville Jaguars owner Shahid Khan linked arms with players in a silent protest before an NFL game in London, if any NASCAR competitors shared the political opinion of athletes expressing themselves elsewhere, they fell completely in line anyway. In a state whose motto is “Live Free or Die,” crewman, including numerous African-Americans, stood in rows as usual for the national anthem, adhering to the prevailing opinion of the sport’s team owners.

Nothing says LFOD more than a 100 percent show of unity! Right?

More on that issue from Rick Moran at American Thinker.

Several individual NASCAR owners have come out against their employees taking part in any protest against the National Anthem, with several of them saying they would fire anyone who took a knee during the playing of the Star-Spangled Banner.

After years of gigging and honing their craft, The Moods are about to release their debut album, Missing Peace. The hotly-tipped band has caused a stir with a live act unlike any other. The Moods fuse hip-hop, reggae, pop, and (even) brass-band with poetic and poignant lyrics. After catching the band live, it was obvious that they had an eclectic bunch of songs ready and waiting for an official release.

The Salford Star (it turns out) is published in Salford, England, which is (it also turns out) just outside Manchester. What's the LFOD connection? It's the lyrics, baby:

Live free or die by the rules
Everybody is being taken for a fool.
The government we trust hangs us out to dry.
The system is corrupt can't deny the lies...

Catchy! That's from the opening track, "P.O.P (Profit Over People)", which the Star reviewer claims "uses an upbeat form to introduce prevalent themes whilst confronting injustice and inequality."

You can order the album, if you want, from Amazon. As I type: $20.99 for the CD, $32.99 for vinyl. So, even amidst all the injustice and inequality, the Moods are not above a little free-market capitalism.