Confession: Mrs. Salad is a member of AARP. It was free, she was (relatively) young and careless at the time, and the only side effect is that we get a lot of mail from them.

AARP once stood for "American Association of Retired Persons", but they dropped that long ago. You could say that AARP no longer stands for anything. Except, of course, keeping the money flowing from taxpayers to elderly beneficiaries of entitlement programs. And also making sure people buy its Medicare supplementary coverage.

But at least their publications occasionally make for interesting reading at the kitchen table. Which is what this post is really about. The August/September issue of AARP The Magazine (presumably named to distinguish it from AARP The Motion Picture) contains an interview with Stanford brain researcher Robert Sapolsky plugging his new book Behave: The Biology of Humans at Our Best and Worst. And this Q-and-A simply leapt out at me: 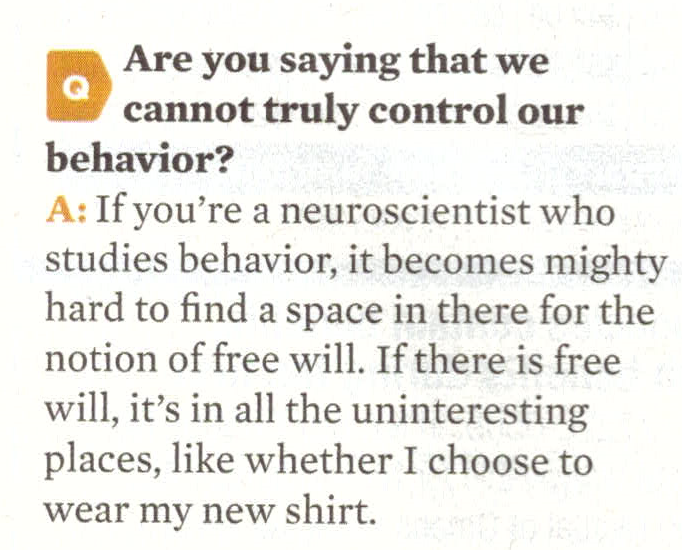 I am sure Sapolsky is a nice guy, a smart guy, and a careful researcher. (Well, maybe. Truth be told, I have no idea. It seems like a charitable thing to say though.) But what he says here is just irredeemably stupid and self-contradictory.

It seems obvious that, in opening up the door to free will in matters of shirt choice, it's a logical necessity that the door remains open for other choices too. If you can use free will to choose your shirt, you can also use it to choose how to spend your time and resources, who to marry, which career to pursue, your ethical beliefs, and… well, just about everything important in life.

How Sapolsky can dismiss such things as "uninteresting" is (to understate it significantly) puzzling.

Yes, I understand that his business is neuroendocrinology, and it's true enough that it's "mighty hard to find" free will at that level.

But that's similar to the very old joke:

Sapolsky's research can't find free will, because it's not where he's "interested" in looking. But the light is better there.

I don't know if it has additional arguments about free will, but if it does, I will carefully consider them. I will weigh them against other things I've read. And then I will decide…

Woops! I will decide? Using what mental facility, exactly?

29 The wicked put up a bold front,
but the upright give thought to their ways.

Well, first, it's not just the wicked that put up a bold front.

But my real problem is: the two parts of the proverb don't seem to be strongly related. What's next? "The wicked kick puppies, but the upright obey traffic signs."?

■ I am (once again) a sucker for these state comparisons. Wallethub provides us with 2017’s Happiest States in America.

In this study, WalletHub’s analysts drew upon the findings of “happiness” research to determine which environmental factors are linked to a person’s overall well-being and satisfaction with life. Previous studies have found that good economic, emotional, physical and social health are all key to a well-balanced and fulfilled life.

■ John Daniel Davidson, writing at the Federalist explains Why The Free Speech Fight Is Really About Smearing The Right As Racists.

In the era of Trump, efforts to shut down free speech by force have come almost exclusively from the Left, and are part of a larger project to redefine the boundaries of political discourse in America. Anyone who espouses conservative views or support for the president (or even insufficient opposition to him) can now expect to be labeled a racist, fascist, or white supremacist.

It has been over 70 years since Orwell wrote (in "Politics and the English Language"): "The word Fascism has now no meaning except in so far as it signifies ‘something not desirable’." Thanks to lefties, we can also toss in "racism", "white supremacy", and "hate".

■ At Reason, A. Barton Hinkle relays good news about his column: This Column Will Pay For Itself!

The Dutch love their bicycles, if we are to believe what we read in The New York Times. A quarter of all trips are made by bicycle, the paper reports, "and the federal government has been building up the country's bike infrastructure over the last decade."

This is very nice, but also: So what?

Here's what: "The yearly investment of roughly 500 million euros, or about $600 million, pays for itself, proponents say, by reducing health, social and other costs."

Hinkle does a fine job revealing the eagerness with which pols push their schemes with the "pay for itself" scam. Rarely are such claims rigorously evaluated, either before or after the fact.

But did I mention that buying stuff at Amazon via the links you'll find here will pay for itself?

Today, Bernie Sanders will release a proposal for single-payer health care, co-sponsored by 15 Democrats. To call it a plan is, in some sense, too generous: Although it envisions a sweeping and generous system that would make government the primary payer for nearly all health care in the United States and virtually wipe out employer health coverage in the space of just a few years, it is not really a plan. Instead, it is a legislative fantasy built on a combination of wild overconfidence in government and an almost comical refusal to grapple with costs or trade-offs.

"Other than that, though, it's fine!"

■ Our Tweet du Jour is from @JamesHeartfield, one of those brave souls who reads Hillary Clinton's new book so you don't have to:

Bizarre misreading: @HillaryClinton thinks the lesson of Orwell's 1984 is that you should trust experts, leaders and the press pic.twitter.com/7rPbrq11fV

Unsurprising; if Hillary understood Orwell, her head might explode.

This 2014 movie has been rattling around my Netflix queue for years; finally faced with the decision to either get it or delete it, I decided to get it. Bad call. It's not awful, but I wish I had gone with any of a few dozen others.

Liam Neeson plays air marshal Bill Marks. His job is to thwart airplane-based terrorism by riding undercover on flight after flight. The thing is, he hates flying. He's also a drunk, and sneaks cigarettes in the lavatory. (Yes, he intentionally tampers with the smoke detector, which, as anyone who listens to the flight attendant announcement knows, is a violation of Federal law, which provides for a penalty of up to $2,000.)

So Bill is pretty miserable. But it gets worse. He gets a message on his phone telling him that that people on the flight will be murdered, one every 20 minutes, unless $150 million is deposited into an offshore account.

And even worse! The account is in his name, leading to suspicion on the ground that he might be behind this whole scheme.

There are a lot of suspects, red herrings, accusations, etc. Bill is not a very clever detective. The denouement is not very credible either.