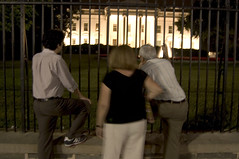 12 The Righteous One takes note of the house of the wicked
and brings the wicked to ruin.

I have to say that I find this a bit creepy. Well, I guess it's the Old Testament.

■ Ever wondered why the left can't let go of racism? Shelby Steele (writing on the other side of the WSJ paywall, sorry) answers: Why the Left Can’t Let Go of Racism

A staple on cable news these days is the “racial incident,” which stands as a referendum on this question. Today there is Charlottesville. Yesterday there were the deaths of Trayvon Martin, Michael Brown, Freddie Gray and others. Don’t they reveal an irrepressible racism in American life? At the news conferences surrounding these events there are always the Al Sharpton clones, if not the man himself, ready to spin the tale of black tragedy and white bigotry.

Such people—and the American left generally—have a hunger for racism that is almost craven. The writer Walker Percy once wrote of the “sweetness at the horrid core of bad news.” It’s hard to witness the media’s oddly exhilarated reaction to, say, the death of Trayvon Martin without applying Percy’s insight. A black boy is dead. But not all is lost. It looks like racism.

The Progressive American Left needs to analyze news in terms of the Oppressor/Oppressed axis. It's their anchor for interpreting reality. And, increasingly, their justification for pushing people around.

■ A good article by Reihan Salam in the dead-trees National Review has broken out into their website: The Case for Skills-Based Immigration. The occasion is the RAISE Act proposed by Senators Cotton and Perdue.

The premise behind the RAISE Act is that we ought to move away from selecting immigrants mostly on the basis of family ties to selecting them on the basis of their earning potential. I’ve long believed an immigration reform along these lines is urgently necessary. Indeed, one could argue that the RAISE Act represents a long-overdue correction of a mistake made decades ago—a mistake made, funnily enough, by immigration restrictionists of an earlier era.

Predictably, the "racist" tarball has been flung at RAISE. Salam puts it into historical context, and rebuts that nasty charge.

■ This is Pun Salad, and although we don't do a lot of overt punning here, this Mental Floss article is a must-read for fans: 10 Pun-derful Facts About Puns. Here's number … um … six:

If anyone knew how great English can be for puns, it was Shakespeare. “Never mistake the Bard for someone above poop and fart jokes,” Berkowitz writes. “When Thersites of Troilus and Cressida says, ‘But yet you look not well upon him; for, whomsoever you take him to be, he is Ajax,’ it’s not just because a character is named ‘Ajax,’ but because ‘a jakes’ meant a public toilet back then.” The greatest writer in the English language, indeed.

■ And the Google LFOD alert rang for the Keene Sentinel's From the files, where they dig out something they published 25 years ago:

“Death is not the worst of evils.” recognize that phrase? It’s the second half of the motto that adorns N.H. license places: “Live Free of Die.” Don’t worry if you didn’t know the answer. A majority of Granite Staters either don’t know or don’t care much about the history of New Hampshire’s state motto. There has been periodic debate about whether the motto belongs on license plates, given its relatively strident tone. Critics ask how “Live Free or Die” compares to other states’ license-plate displays, such as “You’ve Got a Friend in Pennsylvania,” or “Land of 10,000 Lakes” for Minnesota.

■ And Jonah Goldberg has A Word about Dogs

The goodness of dogs can’t be easily summarized because good things are good for many reasons. They are good because dogs are good. They evolved (long before they were bred) to be our partners in this life (as I wrote here). As long as you are good to them, they don’t care whether you are rich or poor, black or white, successful or mediocre. They are all gemeinschaft without an iota of gesellschaft, by which I mean the artificial worlds of politics and commerce are entirely invisible to them. It’s all community and companionship.