… has been seeking P. F. Sloan, but no one knows where he has gone.

Shift is the second book in Hugh Howey's "Silo" trilogy. The first was Wool, which I liked a lot. This one, not so much. (And you might want to stop reading if you haven't read Wool, because what follows could be considered spoilerish.)

In Wool we were introduced to the dystopian world of the silo, a huge cylinder of metal and concrete, where humanity was relegated into a totalitarian system, unbenignly controlled by a few shadowy folks. The external world (which turned out to be just outside Atlanta) has been transformed into a hellish nightmare. The big reveal at the end (unveiled by a plucky young heroine) was that there were many silos, and another shadowy level of control over them all.

Shift answers the question: how did that happen? In the near future, technology has given us the ability to design nanotech machines that can save our lives; but also quickly destroy them. A young Congressman is recruited on the pretense of designing a shelter to protect workers at a new facility for handling radioactive waste. But the true purpose is soon revealed.

The book also follows the backstory of "Solo", who was encountered in the first book. He didn't have an easy life.

The book has a high rating on Amazon, so your mileage may vary, but I found it obscenely overwritten, as if the author had a word count in mind, and just kept stuffing sentences into chapters until his goal was met. The plot isn't heavy enough, and the characters are not complex enough, to deserve all those words. The characters undergo a lot of anguish, mental and physical. It's all painfully described.

Also, I read Wool back in 2015, and maybe shouldn't have waited so long to get to this one. It's easy to forget what you're supposed to make connections with. 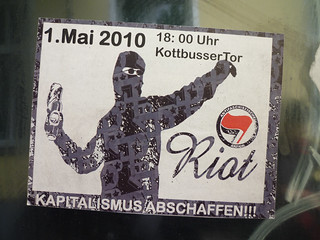 ■ We can appreciate the modern-day relevance of Proverbs 21:7:

7 The violence of the wicked will drag them away,
for they refuse to do what is right.

One can only hope.

■ Today's Flickr embed is from 2010, showing that "Antifa" is hardly a new thing, and explicitly unpeaceful. For those desiring a translation of "Kapitalismus abschaffen": that would be "Abolish Capitalism".

To my mind, that makes J.D. Tuccille's observations at Reason spot on: Choose Sides? You Bet. But Antifa and Fascism Are the Same Side. He takes exception to the leftish narrative:

"One has to take sides," Shuja Haider wrote at Jacobin, echoing other voices on the left. "There is a side that asserts our common humanity and fights fascism, racism, and hate. It was represented in Charlottesville by the leftist groups who took to the streets to confront the far right. The other side is the one that took innocent lives on those same streets."

Take a side? You bet. But Haider and company are trying to force a false choice. They'd have you believe that advocates of free speech, open society, tolerance, and peaceful political change have to pick between fascists with tiki torches and masked "anti-fascists" clashing with them in the streets. But advocates of a free, open, and liberal society are a side—the correct side—and the left-wing and right-wing thugs battling in the streets are nothing more than rival siblings from a dysfunctional illiberal family.

I've taken issue with the "take sides" argument in the past, and stand by the reliable guideline: it's a poor substitute for thinking.

The biggest difference is that Bezos projects the self-confidence of someone with nothing to prove. “I don’t think he’s a showman,” Amazon board member Patty Stonesifer told Wired in a 1999 profile of Bezos, “but people are drawn to him because he seems unbelievably like a winner. And they want to help him win.”

Mrs. Postrel has long been a voice of perceptive sanity.

■ A stunningly beautiful post from Andrew Klavan on The Racist Maze.

White men invented nearly everything from the very concept of science to the internet.

From Michelangelo to Mozart to Shakespeare, white men have created the greatest art, music, and literature on earth.

From Australia to the Americas, white men conquered and slaughtered native peoples.

From Greek democracy to Magna Carta to the Constitution, white men fashioned the ideas that led mankind to freedom.

Wherever they go, white men are guilty of imperialism, bigotry, and genocide.

All these statements, of course, are crap. Not just crap but pure crap, a level of crap that captures the very essence of crapiositude. They aren't crap because of the tiresome arguments and rationalizations that can be marshaled to disprove or modify one or another of them. Their crappiness is far more craptastic than that. They are a crap unity. They are each the crap reflection of their crap opposite, and all a portion of a single central substance, which is crap.

■ Dan Mitchell asks the musical question: Why Is the Trump Administration AWOL on the IRS? For example, why hasn't Trump fired IRS Commissioner John Koskinen? Could it be…

I’m not a fan of conspiracy theories, but this almost leads me to wonder whether Koskinen has some damaging information on Trump.

I would bet some money on that. Not a lot, but some.

If net neutrality advocates are successful in their efforts to give government ever more control over broadband Internet access, they will be surprised to find you cannot regulate the world into perfection.

But the rest of us will not be surprised.