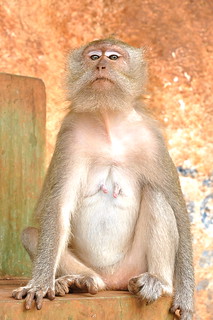 ■ Does Proverbs 21:4 say anything of relevance to our troubled times?

4 Haughty eyes and a proud heart—
the unplowed field of the wicked—produce sin.

Well … maybe. I'm stuck on whatever the Proverbialist is trying to evoke with the "unplowed field of the wicked" imagery.

Our Flickr embed du jour: a haughty monkey. No doubt pondering an unplowed field of the wicked.

■ Roger L. Simon asks the musical question: Is Charlottesville What's Really Going On in the USA? Spoiler: not really.

[…] For the next week or two -- assuming we're not at war with North Korea -- we will hear non-stop geschreiing from our media about what a racist nation we are, how we have to come together, rend our shirts, investigate this and that and endlessly discuss how bad we are until we're finally forgiven at some undetermined point in an ever vanishing future that seems never to arrive.

Don't play that game. What happened in Charlottesville isn't us. It's just a small group of real bad people. Indict them, convict them, and lock them up for a long as possible. The rest of us should move on. We have a lot better things to do.

Can't wait until the next atrocity causes people to … continue to behave exactly the same way they always have.

■ At Power Line, Scott Johnson writes on the Evil Losers on Parade.

What a sickening display of racism, anti-Semitism and all the rest the “white nationalists” served up in their demonstration over the decision to remove the statue of Robert E. Lee in Charlottesville. According to the New York Times, the planned rally was promoted as “Unite the Right,” attracting groups like the Ku Klux Klan and neo-Nazis and movement leaders like David Duke and Richard Spencer.

One would only hope these folks could somehow drown in the poison in their hearts.

■ Jay Nordlinger, an extraordinarily decent fellow, writes at NR About Yesterday, and Today (and Tomorrow). And he notes what a lot of ostensible conservatives shy away from: President Trump's lack of "truth, decency, and honor."

If I had my way, the Republican party — starting with Trump — and the conservative movement would tell the alt-Right, or whatever it should be called, to take their frog and their torches and their buzzwords — “globalist” and all the rest – and stuff it.

I think that, if conservatism gets associated in the public mind with nationalism, populism, demagoguery, grievance, race-consciousness, and tribalism, we are cooked. And the country too.

Call that "moral preening" if you like. But consider why you need to need to resort to that: could it be that you're unwilling to look honestly at Trump's deeply flawed character?

CY: A lot of the criticism has focused on charges that you were essentially telling the women in tech jobs at Google they're not as good or well-suited to those jobs as the men. What's your response?

JD: The purpose of my document was mainly to discuss the ideological echo chamber. As for the gender things, I was trying to explain why we might not expect 50/50 representation in tech largely due to differing interests, and I don't say anything about individual women, especially those in tech.

■ Mark Steyn's Song of the Week Wichita Lineman, and it's a glorious yarn with Glen Campbell, Jimmy Webb, and others. (And a side appearance by Frank Sinatra, asking "Who's that faggot on guitar?" He'd find out.)

[…] in theory it should have been a tough sell: "I've got this song about an employee of the electric company..." Yet, unbeknown to Webb, [Glen Campbell's producer and arranger] Al De Lory's uncle was an actual lineman for the county, in California, in Kern County. "As soon as I heard that opening line," De Lory recalled, "I could visualize my uncle up a pole in the middle of nowhere." What do they think about, those guys up on those poles? Love? Dinner? Hunting season? "I wanted it to be about an ordinary fellow," said Jimmy Webb. "Billy Joel came pretty close one time when he said 'Wichita Lineman' is 'a simple song about an ordinary man thinking extraordinary thoughts.' That got to me; it actually brought tears to my eyes. I had never really told anybody how close to the truth that was.

I dearly love King Kong movies, but this one … eh.

After a small opening scene set at the end of WWII, we jump forward to 1973, as American troops pull out of Vietnam. That leaves warriors like Preston Packard (Samuel L. Jackson) sad. Fortunately, he and his troops are roped into a mad scheme hatched by Bill Randa (John Goodman): to explore Skull Island, which has only now been discovered by satellite photos.

Of course, we have a general idea of what they'll find. Along for the ride are hero James Conrad (Tom Hiddleston) and heroine Fay Wray Mason Weaver (Brie Larson). Humor, sort of, is provided by the survivor from that WW2 scene, played semi-crazed by John C. Reilly.

Acting is pretty good, as you might expect with that cast. Special effects are fine, but (honestly) we're used to that by now. There are numerous shout-outs to Conrad's Heart of Darkness and Coppola's Apocalypse Now. These come off as pretentious. Other than that, the script goes through the motions. Spoiler: they don't get Kong off the island, so there's no New York climax with planes and skyscrapers, and only a few characters escape with their lives. There's some effort to be imaginative with the carnage; the best scenes involve Kong fighting off the invading helicopters.

A post-credits scene sets up the patient audience for what comes next. Hint: starts with "God", ends with "Zilla".

Not that it matters, but Pun Salad was on-hand when the Obama Administration issued its famous/infamous Title IX "Dear Colleague" letter back in 2011, announced by VP Biden himself in the Memorial Union Building at the University Near Here. Looking back at what I wrote that day, I seem to have been mostly accurate ("aggrieved parties will have significantly more avenues to pursue their gripes"), but woefully blind at predicting what would come in the following years. This book by Laura Kipnis (a professor in the Department of Radio/TV/Film at Northwestern University) is a handy, microscopic, look at the (predictable? regrettable? tragicomic? outrageous?) results as it played out at Northwestern and elswhere.

What's the best adjective to use to describe the process by which universities adjudicate and punish accusations of sexual misbehavior among their employees and students? Kafkaesque? Orwellian? McCarthyite? (Maybe "Kipnitian" will take hold.) Which historical trials offer the best parallels? Salem witches? Spanish Inquisition?

Professor Kipnis bills herself (on page one) as a "left-wing feminist", but defies that stereotype forming in your head by having a sense of humor (or it could be irony—as she says, also on page one, she likes irony). Whatever, she writes clearly and honestly about her observations, and there's very little ideology, other than her clear devotion to truth, rights, and justice. (That sounds corny. It's not meant to be.)

One of her primary observations: feminism used to be, and still claims to be, about female equality, that claims of delicate femininity needing special protections are bunkum. Yet, this feminism was "hijacked by melodrama" in higher ed; there, women are seen as helpless waifs in the sway of powerful males. Often they don't see themselves as victims until weeks, months, even years later! When it's been explained to them.

Kipnis tells the story of Philosophy prof Peter Ludlow, under fire from two accusers (both pseudonymous in the book). She was Ludlow's "faculty support person" at Northwestern's conclave. At first, she thought Ludlow probably was guilty, or at least guilty enough to be shitcanned; she came around to think that charges were unmerited. Yet, Ludlow resigned his position before Northwestern could fire him. Kipnis demolishes the charges against Ludlow in both cases; they were based on contestable (and sometimes changing) stories; they were often contradicted by the concurrent actions of the accusers. What Ludlow had was lousy judgment, in the sense of Algren's Third Rule of Life: "Never sleep with a woman whose troubles are worse than your own."

Kipnis had her own woes. She wrote a piece for the Chronicle of Higher Education entitled "Sexual Paranoia Strikes Academe". Which echoed a lot of themes in this book but—oops—caused Title IX complaints to be brought up against her. Chilling effect, you see. And (surprise, surprise) this very book has generated its own lawsuit, from the graduate student pseudonymed "Nola Hartley" therein. Here's hoping Professor Kipnis comes out alive and well on the other end.

Finally, I very much appreciated Professor Kipnis's reaction to being lectured on "confidentiality" and "conduct befitting a professor". It's about the same as I had when I (and other UNH employees) were "asked" by our superiors to sign a public document averring to “Never commit, condone, nor remain silent about violence against women.”

Professor Kipnis's response is one I didn't myself have the guts to make at the time: "Kiss my ass."

Yes, another masterful page-turner from Michael Connelly, chronicling the latest exploits of LAPD Detective Harry Bosch. Or, more accurately, then-latest. Two have come out since, and another is in the pipe for October of this year.

Harry is on the cold case detail ("Open-Unsolved Unit"), looking to solve long-past crimes. A victim of a seemingly-random shooting ten years back was slowly and agonizingly poisoned by the slug in his spine. Now he's died, and the bullet is pried out to reveal … a thread of new evidence!

Bosch has a new partner, too. Due to LAPD social-engineering politics, it's a young Hispanic woman, Lucia Soto, with no detecting experience. Bosch is skeptical, even more so when Lucia seems to have her own secret agenda. Never mind, it turns out that she is, to a first approximation, very Bosch-like in her interests and obsessions. Amusing bit: there's an unstated competition between Bosch and Soto as to who can get into the squad room first in the morning. Slight spoiler: It turns out this book has two cold cases, and Bosch and Soto cut some corners in order to work on both.

Another not-so-slight spoiler: the book ends with both cases "solved" but very little justice meted out. And there's kind of a cliffhanger as far as Harry's future detecting career goes. But: it's hardly a spoiler to know that there at least three more Bosch books after this, so it's safe to assume things work out somehow.