Sensitive People: Maybe you should write a poem instead. 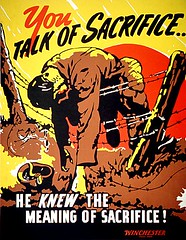 3 To do what is right and just
is more acceptable to the Lord than sacrifice.

I suppose that's good news for people who prefer not to sacrifice. Just do what's right and just. Didn't anyone tell Jesus this?

■ At NR, Michael Brendan Dougherty points out the disparity in Trump's condemnations. Specifically, when it comes to the Charlottesville slimeballs, Trump should have said the same thing he said about the Ariana Grande terrorists: These Guys Are Losers Too.

Even if you believe as I do, that Spencer’s form of white nationalism is a marginal movement granted far too much attention, the sight of hundreds of unmasked young men marching through Charlottesville with torches and chanting racist slogans inspires genuine fear in many Americans. Trump was given a chance to speak to that fear today, and to offer the same moral condemnation and deflation he’s given others. Instead he essentially repeated his disgraceful half-disavowal of Duke. He refused to call out these white supremacists by name, and condemn them. He merely condemned “all sides.” An energetic law and order president who had any sense of the divisions in his country would have announced today that he was instructing his Justice Department to look into the people in these groups, and zealously ferret out and prosecute any crimes they turned up.

To use a phrase from a few years past: too many times, Trump is stuck on stupid.

■ Not that "stuck on stupid" is a criticism confined to Trump. Keith Ellison Saying Kim Is “More Responsible” Than Trump Is Part Of A Disturbing Pattern Of Moral Equivalence. Ellison is a solid Democrat, US House member from Minnesota, Deputy Chair of the Democratic National Committee. And he said:

North Korea is a serious thing. You have [President Trump] making bellicose threats against somebody else who has very little to lose over there.

Kim Jong-un, the world always thought he was not a responsible leader, well he’s acting more responsible than [President Trump] is.

Ellison has since "retracted" this statement. Take it away, Patterico:

Even if we’re just talking rhetoric, Ellison is full of it. You don’t have to agree with Trump’s rhetoric (I don’t) to recognize that Kim’s rhetoric is far less responsible. At Hot Air, the always thorough John Sexton gives several examples of Kim’s explicit threats of aggressive nuclear first strikes against the United States. The threats have been going on for years, and most sentient beings are familiar with them.

But to me, the outrageousness of Ellison’s statement goes deeper than a mere comparison of the rhetoric.Look: Trump may display all of the Seven Deadly Sins. He may be a personally awful human being all the way around. (OK, forget “may.” He does, and he is.) But Kim is evil. His regime is evil. He starves his people, runs secretive prison camps for political opponents, and engages in murder, rape, and torture as a matter of government policy. There is zero free press. The entire nation is one giant personality cult. As cultish as some Trumpers can be, there is no comparison between the two countries. Anyone who says there is — or that Trump is worse — is giving aid and comfort to one of the most purely malevolent regimes on the planet.

Our "leaders" are not to be looked up to.

■ Arnold Kling asks the musical question: Is the economy illegible? For example, is it possible to aggregate fundamentally different "goods and services" and disparate labors of "workers" (L) to come up with an economy's "total output" (Y)? Especially when making comparisons over time?

Once you look at differences across decades, adjusting for price changes becomes important but impossible. For example, Bret Swanson says that the computing power in his iPhone would have cost $12 million in 1991. If for the purpose of comparing Y/L today to Y/L in 1991 you valued every iPhone at $12 million, you would report an enormous increase in real GDP and hence in productivity.

"Important but impossible." Hm. Kling, as always, gives even us non-econ-profs something to munch on thoughtfully.

■ Ah, the Google LFOD alert rang for this Chicago Tribune editorial: Illinois' abortion notification law harms free speech. At issue is the Illinois law that requires doctors who decline to perform abortions must, on request, provide patients referrals or information on where to get an abortion.

One essential component of freedom of speech is the freedom not to speak. In 1943, the Supreme Court ruled that public school students could not be forced to recite the Pledge of Allegiance. In 1977, it said the state of New Hampshire could not require motorists to display its "Live Free or Die" motto on their license plates. The First Amendment, it said in that case, protects the right of all people "to refuse to foster ... an idea they find morally objectionable."

Observation: There are a lot of license plate holders on sale whose upper frame is big enough to obliterate LFOD.

■ And LFOD sprang up again in a publication called the Daily Meal: Adventure Travel for Women: Spend the Weekend With REI Outessa. It's straining a bit to call this "news" or "journalism", but:

If you’re an adventurous woman who likes to try new things and step out of your comfort zone — or if you want to be that kind of gal — then REI Outessa is for you. This weekend-long women-only trip will expose you to new activities and sports. Are you new to trail running? Have you always wanted to attempt rock climbing, mountain biking, kayaking, or stand-up paddleboarding? Maybe you’d like to brush up on your backpacking and outdoor survival skills or learn how to wield a Leather(wo)man tool? REI Outessa has brought in the best guides and adventure women — seriously, they’re incredibly supportive, understanding and knowledgeable — to lead you through these exhilarating experiences that you can take at your own pace and skill level.

That's the kind of gritty outdoorsmanship you just don't get from Field & Stream! But where's LFOD? Ah, there 'tis:

Whether you’re a mom traveling with your daughter, a newly divorced woman traveling solo, a young twenty-something between careers, a wild, live-free-or-die adventurer, or a cancer survivor with a new lease on life, you will get something out of a weekend spent in the outdoors.

Note: if you are a wild live-free-or-die adventurer in New Hampshire, you'll have to drive down to Reading MA for the nearest REI store. (Real New Englanders, of course, just go to L. L. Bean.) But one of the "Outessa" events is in Waterville Valley in September, and it's a mere $799 per person for the event, plus $199 to reserve your own tent spot. (Pricier options are sold out as I type.) Hope you have some money left over from your treatments, cancer survivor!

■ From Mental Floss, one for the "What Would We Do Without Experts" category: Experts Say Trying to Force Yourself to Be Happy Doesn't Work. Or perhaps it's the "News You Can Use" category:

A new study published in the Journal of Personality and Social Psychology finds that people who accept their difficult emotions are better off in the long run than those who try to force their way into a better mood.

Gosh, psychology sure has made a lot of progress over the centuries. Glad they finally got around to checking that out.