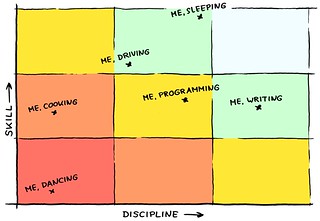 ■ Proverbs 22:15 reminds us just how pro-corporal punishment those ancient Israelis were:

15 Folly is bound up in the heart of a child,
but the rod of discipline will drive it far away.

Some translations (the more literal ones, I would guess) use "boy" instead of "child".

I just imagine the Rod hanging in the corner of the ancient Israeli breakfast nook, with the label: "The FollyWhacker".

■ At the WSJ, William A. Galston has a question: Can the ‘Problem Solvers’ Fix ObamaCare? Mr. Galston is all moony-eyed over Senator John McCain's vote against the Obamacare "skinny" repeal and accompanying speech. But this caught my eye:

As Mr. McCain spoke, the “Problem Solvers”—a 43-member House caucus split almost evenly between Democrats and Republicans, and originally launched by No Labels, of which I am a co-founder—were working to meet his challenge. The group’s leaders, Reps. Tom Reed (R., N.Y.) and Josh Gottheimer (D., N.J.), announced their results earlier this week. The proposal is aimed at stabilizing the deteriorating individual health-insurance market and creating clarity for consumers as quickly as possible. The deadline for submitting coverage plans and premiums for 2018 comes in two weeks.

"Problem Solvers"? It occurred to me that the "No Labels" group should change its name to "OK, Maybe Just This One Label". [I submitted a small LTE to this effect, I'll let you know if it goes through.]

If you can get to it through the WSJ paywall, Mr. Galston's article is full of euphemisms, evasions, and misdirections. One small example from the above excerpt: it's an insult to actual markets to call the individual health-insurance mess a "market".

And "stabilizing the deteriorating individual health-insurance market and creating clarity for consumers as quickly as possible" is No Labels-ese for "funneling billions more taxpayer dollars to health insurance companies".

■ The WSJ editorial board is considerably less taken with the pleas to The Coming ObamaCare Bailout. The editorial will bring you up to speed, if necessary, on How We Got Here. And makes a sensible suggestion:

Republicans put themselves in this political box by failing to reform ObamaCare on their terms. They shouldn’t compound the rout by flipping their convictions on the power of the purse or surrendering wholesale to Democrats and insurers. They need to demand that “bipartisan” means both sides get something.

I am not optimistic that Republicans are smart enough to take this advice.

■ At Reason, Veronique de Rugy notes the GOP's small-government rhetoric vanishes like the summer dew when they've actually been handed the reins of power: Oops, Republicans Did It Again

For all of the GOP's deriding of Democrats over the years for being "tax-and-spenders," the sad reality is Republicans are on their way to earning the same label. We might only be six months into the return of Republican rule, but it's already looking as if this second go-round of Republican control in Washington this century could end up being as disastrous—if not more—than the first one. But as the saying goes, fool me once, shame on you; fool me twice, shame on me. I don't intend to be fooled twice, and I hope I'm not alone.

She's not alone. There are at least two of us.

■ Our fifth item (and the second rhetorical question of the day) is from John Fonte and Mike Gonzalez at the Daily Signal: Should Left-Wing Activists Like Linda Sarsour Be Allowed to Divide America Through the Census? (Spoiler: their answer is "no".)

Somewhere in the bowels of the Office of Management and Budget sit two proposals on how to rewrite the 2020 census—and force America further down the road of identity politics and cultural Marxism. Busy political appointees should reject them. In fact, they should rethink the entire paradigm of dividing the country into artificial groups.

At issue is the creation of of yet another Official Government Census Pigeonhole:

This new and completely artificial (hence unscientific) “race-ethnicity” will be called MENA (Middle East and North Africa). It will include Americans descended from such disparate racial groups as Persians, Arabs, Turks, Lebanese, and Somalis and Sudanese from sub-Saharan Africa. It will include, of course, many Muslim Americans and Middle Eastern Christians.

It's a dreadful idea, but understandable: it's the first step in becoming a Victimized Class. Which doesn't help the Class much, but is a great lever for activists to gain power and privilege. (This topic has occasionaly appeared on Pun Salad's Radar Screen of Irritation here, here, here, here, here, and here. Wow, that's a lot.)

■ And our Google LFOD alert fired on this news story out of Exeter: Gov. Sununu praises American Independence Museum. The occasion was a visit to the museum, housed in what was the Governor's Mansion in the late 1700s. The Gov had remarks, and they sound like a stream-of-consciousness speechlet assembled from snippets he has on autoplay/shuffle in his cranial iPod:

“We really try to put an emphasis on cultural resources,” Sununu said. “We’ve put our cultural and natural resources together. I’m a big believer in the term we use ‘the creative economy.’ It’s everything from artisans to our natural resources to the culture and rich history we have, and selling that. That’s our asset. That’s one of the things that makes New Hampshire so special. By going out and promoting it and selling it and letting people know things like this are right here in our backyard, it’s just a way to drive tourism, drive dollars into the economy and make an appreciation for what makes the ‘live free or die’ state so special.”