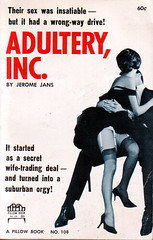 14 The mouth of an adulterous woman is a deep pit;
a man who is under the Lord’s wrath falls into it.

We try to keep this blog PG-13, but when the Good Book goes R, what are you gonna do?

I hear you out there: But it takes two to tango! There is not much even the diligently non-sexist Bible translations can do with this verse.

■ NR's Victor Davis Hanson explores the history of Chief Executive nuttiness (here and abroad) in Trump — And the Use and Abuse of Madness.

Occasionally insanity, real or feigned, has its political advantages — largely because of its ancillary traits of unpredictability and an aura of immunity from appeals to reason, sobriety, and moderation.

I thought VDH's essay was going to be about the recent brouhaha about the American Psychiatric Association's removing the "Goldwater Rule", prohibiting its members from public speculation on the mental problems of prominent non-patients. (which it didn't do).

But no. VDH says that loose-cannon behavior can be useful, when used sparingly.

■ Peter Suderman is a reliable go-to for health policy analysis. He's got good news and bad news at Reason: By Propping Up Obamacare With Illegal Payments, Trump Is Eroding the Rule of Law.

For a prime example of how the poorly conceived policy of Obamacare interacts with the Trump administration's disregard for the rule of law, look no further than the debate over the health law's subsidy payments to health insurance companies.

Over the last several months, as Republicans have struggled with legislation to repeal and replace Obamacare, President Trump has repeatedly warned that the health care law is already failing. If Congress did nothing, he said last week, he would let it "implode." That may sound passive, but coming from Trump, it was an active threat to hasten the law's demise.

Bottom line: Trump should just cease the cost-sharing reduction (CSR) subsidies for insurance companies, because Congress has refused to appropriate money for them.

■ The other Obama-designed illegal bailout Trump threatens to stop is analyzed by Phil Kerpen at the Federalist: Trump Should End Obama’s Bailout of Congress’s Health Care. He reviews the sordid history; there's no question that Trump can undo the Obama skulduggery that saved Congresscritters from having to buy health insurance on the exchanges with no taxpayer subsidies.

If Congress thinks Trump is in the wrong to end their sweetheart deal, they can always vote their taxpayer-funded employer contribution back into effect—and face the political consequences.

Again, Trump is using this as a bargaining chip. He shouldn't. Just do it, Mr. President.

■ Arizona Senator Jeff Flake pens a mea culpa at Politico: My Party Is in Denial About Donald Trump. Well, it's actually more of a wea culpa, because there's a lot of "we"s involved:

Who could blame the people who felt abandoned and ignored by the major parties for reaching in despair for a candidate who offered oversimplified answers to infinitely complex questions and managed to entertain them in the process? With hindsight, it is clear that we all but ensured the rise of Donald Trump.

Flake's directs friendly fire upon his own party. Which is somewhat deserved. It's an excerpt from his new book Conscience of a Conservative: A Rejection of Destructive Politics and a Return to Principle. (Alternate title: I'm Gonna Run Against Trump in 2020.)

The next 10 cocktails after that she becomes increasingly bitter and belligerent pic.twitter.com/JoMzo4yj00