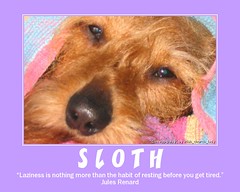 ■ What does the fox say? Never mind that, Proverbs 22:13 knows what the sluggard says:

13 The sluggard says, “There’s a lion outside!
I’ll be killed in the public square!”

Did that happen in ancient Israel? I suppose it must have, in order to make the sluggard's excuse even semi-credible.

I note that Proverbs 26:13 is a repeat of this. Generally, Proverbs is laden with insults aimed at the sluggard.

Today, of course, the sluggard simply says: "I'm not lazy! I'm just differently motivated! Also, there might be a lion outside."

If a new HealthCare Bill is not approved quickly, BAILOUTS for Insurance Companies and BAILOUTS for Members of Congress will end very soon!

If you'd like to see how Politifact gingerly handled this tweet, see here for the insurance companies; see here for Congress. And then, for some actual facts, see Josh Blackman at NRO: President Trump Must End Illegal Obamacare Payments to Congress and Insurers. Blackman goes through the tangled, sordid, history of both bailouts (and, yes, Politifact, that's a perfectly fine label for them); essentially, Trump is threatening to undo the skulduggery of the Obama Administration.

Halting the illegal payments to insurers and Congress would go a long way to repair these breaches in our separation of powers. But here’s another negotiation tactic: Don’t rescind the payments immediately. Announce they will be repealed on January 1, 2018. A deadline may provide the nudge needed for Congress to reach consensus on health-care reform and prove that our checks and balances still work.

I don't see the value in the "negotiating tactic" Blackman recommends—just do it, Trump!—but I am not a negotiator.

■ There's a nasty smear being flung at school-choice advocates: that they're secret advocates of school racial segregation. And that mud was recently flung by American Federation of Teachers president Randi Weingarten. At City Journal, Larry "No Relation" Sand tackles Randi Goliath.

Weingarten engaged in a telling Twitter exchange with her nemesis, Education secretary Betsy DeVos. “@BetsyDeVosED says public $ should invest in indiv students,” Weingarten wrote. “NO we should invest in a system of great public schools for all kids.” DeVos fired back: “They have made clear that they care more about a system—one that was created in the 1800s—than about individual students. They are saying that education is not an investment in individual students. They are totally wrong.” Weingarten and her cronies are more interested in keeping the government-union duopoly in place than in educating children. Protecting the system takes priority.

■ In fact, this smear is looking like a coordinated attack. A New York Times op-ed from one Katherine Stewart was ominously titled What the ‘Government Schools’ Critics Really Mean. There's "a much older, darker heritage"! Aiee!

At Reason, Jesse Walker chides Ms. Stewart: Sloppy History in The New York Times. No excerpt (RTWT), but here's a spoiler: The phrase was used in 1858 by abolitionist Garrit Smith.

You know, I'm old enough to remember when it was us right-wingers who saw Commies under every bed. Today, the lefties are seeing John C. Calhoun there. (Also left as a comment at Reason.)

■ Y'know, I don't hate income inequalty per se, but you might. And if so, you should check out J. D. Tuccille at Reason: Hate Income Inequality? Blame Intrusive Government Policies

Still, the growing gap between the wealthy and the poor is a preoccupation in many circles—particularly among people who favor activist government economic policies to rectify the situation. So it's interesting when the Federal Reserve Bank's Barnett adds that "One factor contributing to this trend is the increase in involuntary part-time workers," and then reports that employers tell researchers they've turned to hiring part-time workers instead of full-timers because of the costs associated with employee benefits, health care, workers' compensation insurance, and minimum wage hikes.

Keep that in mind when the advocates for the next government-mandated "benefit" (e.g., "Universal paid family leave") come a-knockin'.

■ Crockett Johnson's Harold books were some of my favorites to read the kiddos, back when they would sit still for that sort of thing. But, since I am a near-total illiterate in some areas, I was surprised to hear about the Mathematical Paintings of Crockett Johnson

Inspired by the allure of the space age, many Americans of the 1960s took great interest in mathematics and science. One of them was the cartoonist, book illustrator, and children’s author David Crockett Johnson. From 1965 until his death in 1975 Crockett Johnson painted over 100 works relating to mathematics and mathematical physics. Of these paintings, eighty are found in the collections of the National Museum of American History. We present them her[e], with related diagrams from the artist’s library and papers.

Harold does not appear, which is kind of a shame.