… is just pawn in game of life. 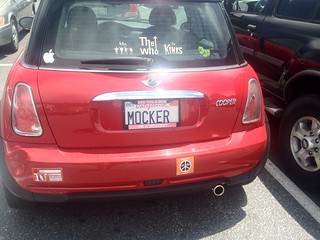 ■ Advice to the Trump Administration from Proverbs 22:10:

10 Drive out the mocker, and out goes strife;
quarrels and insults are ended.

So if only we could find the mocker… Wait! Wasn't that him behind the desk in the Oval Office?

We last saw Proverbial mockers back in 29:8; they weren't looked on favorably then either.

Because they've gone about it all wrong. Instead of treating global warming like a problem that needs to be addressed regardless of what caused it, the green left has been more obsessed with establishing humanity's culpability and embracing ever more extreme and painful mitigation steps, as if they were more concerned with punishing the perpetrators than solving the problem.

I'd add: see Arnold Kling's The Three Languages of Politics. The Progressive Left talks and thinks about issues in terms of Oppressors and Oppressed; hence, as Ms. Dalmia notes, it's about finding the bad guys.

■ There are a lot of forensic commentators out there, performing autopsies on the GOP's foot-shooting Obamacare-repeal botch. If you can bear to read one, I suggest Megan McArdle: RIP, Repeal and Replace.

You have a neophyte president who doesn’t know how Washington works, and doesn’t care to learn, and therefore provides none of the leadership that is normally necessary to get a major policy bill through Congress. You have a Republican caucus that spent six years promising to repeal Obamacare without bothering to make plans for, or get a consensus on, how they would actually do so. And thus we were repeatedly treated to the incredible sight of bills that literally no one in the legislature actually wanted, even as they were voting to move them forward. The only way people could bring themselves to cast that “Aye” was by nervously assuring each other that somewhere down the line, someone would come to their senses and stop this thing from actually becoming the law of the land -- the Senate, or the conference committee, or in the most desperate scenario, perhaps the president could … well, I’m sure the conference committee will come up with something we can actually like.

What next? Democrats, who love to excoriate insurance companies, are also proposing legislation to … bail out insurance companies trapped in the Obamacare death spiral. (You'll see this euphemized as "the permanent payment of cost-sharing reduction fees to help stabilize the individual market".)

AFP-NH does not score every vote. Rather the focus of this Score Card is to consider the most important votes cast in a number of key areas that impact a free market, such as taxes, spending, health care, education choice, worker freedom, regulation, free speech, property rights and ending cronyism. This year, the Legislature had the opportunity to vote on important issues in these areas, such as making New Hampshire a Right to Work state and lowering business taxes to make the state more competitive.

My House reps are poor performers, with only one exception.

In the Senate, I'm "represented" by David H. Watters, Durham Democrat, who managed a 0% score from AFP.

■ Mental Floss helps out those who might want to stare at the sun on August 21: How to Make Sure Your Eclipse Glasses Are Safe. Spoiler: get a name brand, check the fine print.