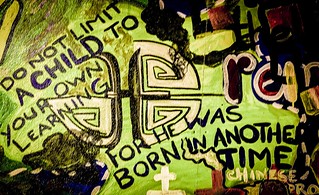 And we now return you to our regularly scheduled programming…

6 Start children off on the way they should go,
and even when they are old they will not turn from it.

6 Train up a child in the way he should go: and when he is old, he will not depart from it.

I wonder if that's more faithful to the original Hebrew? It's good advice in any case.

One of the great enduring stupidities of modern economic life is the belief that buying American is somehow beneficial to the United States as a whole. A related daft notion, very popular among our progressive friends horrified at the chauvinism of “Buy American” campaigns, is that buying local helps your local community and economy. This stuff has been studied and studied and studied, and the short version is that buy-American/buy-local efforts amount to approximately squat. It makes sense if you think about it: You can buy a bag of green beans from your local farmers’ cooperative and feel good about yourself, but that farmer is going to use the money to pay his bills, probably to a faraway financial company that holds his mortgage, a carmaker overseas, or a tractor-financing company abroad. He might buy his diesel from a local retailer, but that diesel very likely comes from crude oil drilled in some faraway place (from Canada to the Middle East) and refined in another faraway place. The components that went into those green beans — seeds, fertilizer, farming equipment — probably weren’t locally made. Money likes to move around.

If I restricted myself to "buy local" when it comes to pharmaceuticals, I'd probably be dead.

A Reason review of the 50 businesses invited to Trump's "Made in America" event reveals that 21 of them have received some form of government grant, subsidy, loan guarantee, or other economic incentive since 1997, according to records aggregated by Good Jobs First, a union-funded nonprofit that opposes corporate welfare.

Running the names of the 50 businesses through the "subsidy tracker" database maintained by Good Jobs First revealed more than 870 records of individual handouts totaling more than $598 million in spending at the local, state, and federal level.

Boehm points out that President Obama was widely derided back in 2012 for his "you didn't build that" remarks. Some people foolishly thought that President Trump would have a different attitude; they should be embarrassed by his celebration of corporate welfare queens.

But they won't be.

■ Patterico praises principled people: These Three Conservatives Make Me Feel Like There Is Still Sanity in the World. Spoiler alert: Ben Shapiro, Charlie Sykes, and Jonah Goldberg. Each is extensively quoted.

Thank you for setting an example. Thank you for reaffirming that decency is not a joke — in a culture that increasingly treats it as one.

For each of you, saying these words, and staking out these positions, is both easy and very difficult. Easy, because it’s the only way you know. You would never become one of the panderers — we all know they exist and who they are — who openly praise the worst of Trump’s immorality, and decry as “sissies” anyone who disagrees. So in a way, it’s easy for you . . . because you would never contemplate being other than who you are.

I would add a few folks to Patterico's list, but he's otherwise on target.

■ Ah, the Google LFOD alert rang for a Sunday op-ed in my local paper, Foster's Daily Democrat, by one Crystal Paradis: The trouble with tipping.

There are also plenty of economic detractions to tipping — the turnover rate for the hospitality industry is drastically higher than all other industries (20.7 percent in 2016) and part of this can be linked to the instability of what restauranteur Danny Meyer calls a “false economy” that doesn’t factor service into base pricing. Taking all of this into consideration, what if a restaurant owner decided to simply get rid of tips and put all employees on salary? New Hampshire law prohibits this. In the “Live free or Die” state, an employer is not allowed to make their own decisions about employee compensation, even if they’ve concluded paying salaries would save costly turnover rates and training time.

The author blurb at the end of the column approaches self-parody:

Crystal Paradis works with progressive organizations who prioritize intersectional feminist leadership, LGBTQIA+ equality and environmental protection and conservation. She promotes and practices values-centric work. She can be reached at [...].

■ We now return to the topic of parent/child relations. It's not recent, but my attention was drawn to an advice column in (of all places) the Village Voice. Ask Andrew W.K.: My Dad Is a Right-Wing Asshole. Because I am both a dad and (some would say) a right-wing asshole. From Andrew W.K.'s reply to the RWA's son:

When we lump people into groups, quickly label them, and assume we know everything about them and their life based on a perceived world view, how they look, where they come from, etc., we are not behaving as full human beings. When we truly believe that some people are monsters, that they fundamentally are less human than we are, and that they deserve to have less than we do, we ourselves become the monsters. When we allow our emotions to be hypnotized by the excitement of petty bickering about seemingly important topics, we drift further and further away from the fragile and crucial human bond holding everything together. When we anticipate with ferocious glee the next chance we have to prove someone “wrong” and ourselves “right,” all the while disregarding the vast complexity of almost every subject — not to mention the universe as a whole — we are reducing the beauty and magic of life to a “side” or a “type,” or worst of all, an “answer.” This is the power of politics at it’s most sinister.

You know, I'm not immune to that sort of bad behavior myself. Probably even in what you've read above. My apologies, specifically, to Crystal Paradis. I'll try to do better.