It's that old story: guy meets girl, girl takes guy to meet parents, parents are kind of a nightmare. But in an unusual way, so that's good.

There is a slight racial angle. The guy, Chris (Daniel Kaluuya), is black; the girl, Rose (Allison Williams) is white; Mom and Dad (Catherine Keener and Bradley Whitford, respectively) are also People of Pallor. And they're super rich.

But they're not bigoted. Oh no no. The servants (or are they servants) are black. And at least one of the folks invited to the house for a big party has a young black husband! But as it turns out all those black people are giving off kind of a Stepford-wife vibe. Rose's brother is seriously creepy. And poor Chris keeps getting little hints what something bad is happening. And of course it is.

It's written and directed by Jordan Peele, who actually has (it says here) a white girlfriend, and is himself the product of a black dad and white mom. So it's not as if he's generally against that sort of thing (and of course neither am I), but I'd be asking him about it.

Ah, another Reacher novel from Lee Child. Another relentless page-turner. (Ooops, Kindle version: make that screen-swiper.) And another literally unbelievable plot-driver: Reacher happens on yet another massive criminal conspiracy simply by getting off the train in a certain place, at a certain time.

Specifically, he's intrigued by the name of a small town: "Mother's Rest". Maybe a beloved parent passed away there? Or did a wagon train need to stop there for a few days while a new mom recovered from an unexpected delivery? Reacher resolves to find out!

Spoiler: he doesn't find out, not until the very end anyhow. What he does find is Michelle Chang, an ex-FBI agent, now private investigator, who's waiting for someone else to get off the train. Who doesn't. (And we as readers know he won't, because Chapter One describes the bad guys burying his body deep in a hog pen.)

As usual, what follows is a lot of intrigue, exceptional detective work, some violence, and the gradual unveiling of the big secret, which is truly sordid. Chang turns out to be more than a worthy sidekick. It ends on a bit of a cliffhanger. And since (I peeked) the next book in the series is a flashback, looks like I won't see it resolved for a while. 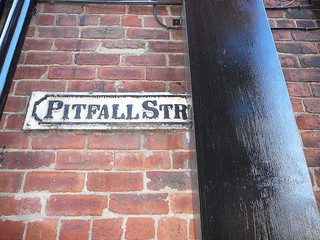 5 In the paths of the wicked are snares and pitfalls,
but those who would preserve their life stay far from them.

I call an Ambiguous Pronoun Reference foul on the Proverbialist. There are three things to which the final "them" could refer: (1) the wicked; (2) the paths taken by the wicked; (3) the snares and pitfalls on said paths. Which, specifically, are we to avoid?

My guess is "the wicked". Avoid the wicked, you automatically avoid the paths, and the snares and pitfalls thereon.

■ The good old Google LFOD Alert drew me to Ms Paula Hodges' column in the Concord Monitor. She warns: ‘Election Integrity Commission’ is just a voting rights rollback. She's not a fan:

In the spirit of “Live Free or Die,” let’s make sure that the governor understands we won’t let this issue pass without a fight.

Ms. Hodges is NH's director for America Votes: "We lead COLLABORATIVE EFFORTS to advance PROGRESSIVE POLICIES and WIN ELECTIONS in key states…" NH being one of those keys. Their partner list (Planned Parenthood, House Majority PAC, NextGen Climate, Brady Campaign,…) leaves little doubt about who they want to win those elections.

■ The second trigger for LFOD was an unexpected source: the Brunswick [Georgia] News, which relates a tale from 1803 on the Georgia coast: Igbo landing a defiant act for freedom. A ship arrived with prospective slaves, and…

Rather than submit to an existence of bondage and forced labor at the hands of another, these products of proud warrior stock made a staggeringly poignant declaration of independence with their very lives. It happened right here in the Golden Isles, way back in May of 1803. Some 13 members of the Igbo tribe walked as one in chains into St. Simons Island’s Dunbar Creek and drowned themselves rather than accept a life of slavery.

We get the occasional chuckle out of people (like Paula Hodges, above) who invoke LFOD to support nearly every conceivable position under the sun. But this is the real deal, friends.

This striking testament to the harsh legacy of slavery is revered and preserved within the local African American community. It also is a much-cherished story among their descendants back in the Igbo homeland in present day southeastern Nigeria. But there is little in the way of a public marker here on St. Simons Island to commemorate the Igbo’s resolve to live free or die. That seems a shame. Their sacrifice embodies the distinctly American traits of independence, self determination and, when forced, strong-arm rebellion in the name of freedom. Like those 200 Texans at the Alamo in 1836, these Igbo gave their lives in a desperate last stand for that most treasured concept. Thus, they deserve an equally celebrated place in the hearts and minds of all Americans.

■ David Mamet relates how some literature doesn't sit well with him. Specifically: Charles Dickens Makes Me Want to Throw Up.

There I was, sitting on a bench and reading, minding my own business in Harvard Square, where I had an office for 20 years. An old professorial type came up to me. “What are you reading?” he asked. “Trollope,” I said, “he’s the greatest.” Here the man admonished me. “ George Eliot is the greatest,” he said, and walked off.

I had just been given the Received Word, and one could be certain, for the fellow had a beard. Though affronted, I gave it some thought. And I concluded that he, though entitled to his opinion, had not only placed his ex cathedra chip on the wrong square, but also on my shoulder. Sheesh.

Hope you can get through the WSJ paywall to find out why Mamet dislikes Dickens. (He likes A Tale of Two Cities, though.)

There's an anecdote involving Landau's villainous role as "Leonard" in North by Northwest. The director, Alfred Hitchcock, thought it would be neat if Leonard wore better suits than Cary Grant's character. So…

[…] he sent the actor to see Grant's tailor, Quintino of Beverly Hills. A couple of weeks later, Landau arrives to shoot his payphone moment at LaSalle Street Station in Chicago, and gets there in the middle of Cary Grant's scene. So he stands in the middle of a crowd of Chicagoans who are watching all the comings and goings. He's hardly been there a few minutes when there's a tap on the shoulder, and he turns to find Grant's English valet behind him. "Only two people in the world make a suit like that," the guy says, unaware that Landau's in the film. "One's in Beverly Hills, the other's in Hong Kong. Mr Grant wants to know where you got yours."