… sees life crystallized through its jar. 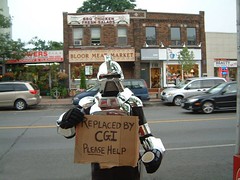 The usual phrasing "Spare the rod, spoil the child." doesn't appear in the Bible, but this is pretty close.

■ At Reason, Deirdre Nansen McCloskey exposes The Myth of Technological Unemployment. It begins:

As a savvy reader, you already know that technological change is why the jobs in manufacturing are drifting away from Youngstown, Ohio. You know that most of the drift goes to other American cities, such as Houston or Chattanooga. You know that Appalachian jobs in coal mining are not coming back, because new techniques have permanently cheapened natural gas. You know that the Trump administration's scapegoat, foreign competition, bears little responsibility for any of this. And when foreign encroachment does happen, you know it's good, not bad, for most Americans.

… and it just gets better, debunking-wise, from there. I'd quote the whole thing, but that's overkill. Highly recommended.

■ Speaking of debunking, I've slacked off on blogging various refutations and criticisms of Professor Nancy MacLean's Democracy in Chains, the taxpayer-subsidized hit-job book on James Buchanan (specifically) and libertarians (generally), because they just keep coming, and the underlying point is always the same: her book is tendentiously dishonest and sloppy.

But Professor Nancy is the gift that keeps giving. At the WaPo-hosted Volokh Conspiracy, David Bernstein reports on Nancy MacLean’s conspiratorial response to criticism of ‘Democracy in Chains’

Nancy MacLean, author of “Democracy in Chains,” has not responded to substantive criticisms of her book. What she has done, however, is circulate a fanciful and potentially libelous post accusing Jonathan Adler and me of being at the center of a Koch-backed conspiracy to discredit her book. She refers to “Koch operatives and the riders of their academic ‘gravy train’ ” and writes, “It appears they are using Washington Post blogposts as a seemingly respectable pivot for a coordinated and interlinked set of calculated hit jobs.”

I sometimes wonder if "Koch Operative" is a position one could apply for. I hear it's highly paid! Or at least that's what's implied by my lefty friends … and now Nancy MacLean. Where do I send my résumé?

Um, seriously. Bernstein debunks MacLean's paranoid ravings. They are an eminently predictable outburst from an mediocre academic whose work has been shown to be slipshod and borderline fraudulent.

■ I'm a sucker for state rankings, and the Mercatus Center is Ranking the States by Fiscal Condition. Yay!

The financial health of each state can be analyzed through the states’ own audited financial reports. By looking at states’ basic financial statistics on revenues, expenditures, cash, assets, liabilities, and debt, states may be ranked according to how easily they will be able to cover short-term and long-term bills, including pension obligations.

Zzzzz… Oh, sorry. Spoiler: New Hampshire is … smack dab in the middle, 25th place. Which isn't great, but it's a relatively sober island in otherwise fiscally-drunk New England. Maine is #35, Connecticut #37, Rhode Island #38, Vermont #40, and Massachusetts is not-quite-last at #48. This is based on 2015 data; I bet that Connecticut is currently in worse shape than that.

■ My Google LFOD alert was triggered by a New Hampshire Public Radio interview with our affable governor: On Energy, Election Commission, & Education, Sununu Casts Himself As More Pragmatist Than Politician.

I don't have a lot of patience with pragmatists—and is there a less pragmatic state motto than "Live Free or Die"?—but here he is on the Kris Kobach-helmed Election Integrity Commission's request for voter data:

In a way we’re giving the federal government access to information they already have access to. In other states, it might be different – they might collect birth dates or social security numbers or things like that. But that’s not part of the public database here. We’re unique here because we keep our information so limited, because we have that live free or die spirit here, if you will, and I think we respect the integrity of people’s personal and private information.

Not that it matters, but I liked Chris's brother, John E., a lot. For a Republican politician, that is.

■ Olivia Goldhill of Quartz Media asks the musical question: Why are so many smart people such idiots about philosophy? And the recent example of idiocy is:

There’s no doubt that Bill Nye “the Science Guy” is extremely intelligent. But it seems that, when it comes to philosophy, he’s completely in the dark. The beloved American science educator and TV personality posted a video last week where he responded to a question from a philosophy undergrad about whether philosophy is a “meaningless topic.”

The video, which made the entire US philosophy community collectively choke on its morning espresso, is hard to watch, because most of Nye’s statements are wrong. Not just kinda wrong, but deeply, ludicrously wrong. He merges together questions of consciousness and reality as though they’re one and the same topic, and completely misconstrues Descartes’ argument “I think, therefore I am”—to mention just two of many examples.

Well, darn. <sarcasm>And I had previously thought that Bill Nye was a bona fide genius in any and all areas he chose to comment upon!</sarcasm>

Ms. Goldhill also indicts Neil DeGrasse Tyson and Stephen Hawking for their philosophical babbles. She doesn't mention Richard Feynman, but she could have.

The Salad family has fond memories of the animated version. It came out in 1991 when the kiddos were just old enough to enjoy it. I think we still have the VHS tape rattling around in a closet somewhere (although the VCR needed to play it is long gone). It was the second flick in Disney Animation's resurgence, after The Little Mermaid. And now, since CGI can do magic a quarter-century later, they brought out this live-action version. Cool! Although the kids have moved out…

The story's still the same, a heavily embellished version of the original fairy tale: an ill-behaved prince treats an importuning crone uncivilly; as a result, he's turned into a … well, you know what. A number of his innocent servants are turned into houseware as well.

Meanwhile, in the nearby provincial village, young feminist Belle and the villagers view each other with mild hostility. (Except for male dimwit/hunk/villain Gaston, who pines for her hand in marriage.) Her dad loves her, though. But he bumbles into the Beast's castle, and to rescue him, Belle must submit to captivity.

You probably knew all that plot anyway.

The tunes are still very catchy (still stuck in my head, in fact), the script is captivating and clever enough, and all the actors are talented. For some reason, the live-action versions of Lumière, Cogsworth, Mrs. Potts, Chip, et al. came off as a little creepy for me, but I'm not sure why.