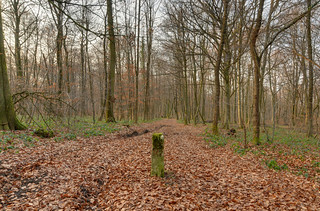 10 Do not move an ancient boundary stone
or encroach on the fields of the fatherless,
11 for their Defender is strong;
he will take up their case against you.

Apparently encroachment was a thing back in ancient Israel, and was especially prevalent against the fatherless. (Imaginary taunt: "Oy! What are you gonna do, get your daddy to beat me up?") Fortunately, God is on the right side here.

Any person who purposely commits or causes to be committed any of the following acts with regard to a boundary marker knowing it to be a boundary marker shall be guilty of a misdemeanor: defacement, alteration of location, or removal of a stone wall or monument, or a mark on a tree, made for the purpose of designating a point, course or line in the boundary of a tract of land or in the dividing line between towns.

Hear that, boundary-marker movers? A misdemeanor! You're in a heap slight amount of trouble now!

NH law doesn't mention any special treatment when the victim is fatherless, so that's still in God's hands. And that's the Old Testament God, so…

■ I swear I did not know this: Marco Rubio Is Tweeting the Most Republican Part of the Bible. And, according to Joel S. Baden of Politico, what's that part?

Marco Rubio had a message for his nearly 3 million Twitter followers on the morning of June 26: “As dogs return to their vomit, so fools repeat their folly. Proverbs 26:11.”

That one might have been his most head-snapping, but Rubio, the Republican senator from Florida, had been tweeting verses like that one since May 16. He has tweeted a biblical verse almost every day since then. Almost all of them come from the Old Testament, and specifically the book of Proverbs.

Hah! Pun Salad has been blogging (but not tweeting) Proverbs, I'm pretty sure daily, since February 3. (And we got Proverbs 26:11 back on May 9.) So, if anything, Rubio got his bright idea from Pun Salad!

OK, so that's unlikely. But … Republican?

Proverbs is notable in that is presents a fairly consistent view of the world: The righteous are rewarded, and the wicked are punished. In the understanding of Proverbs, everyone gets what is coming to them; behavior is directly linked to reward or punishment. This worldview has social consequences: Those who succeed in life must be more righteous than those who struggle.

Baden—actually, it's Professor Baden of Yale Divinity School—characterizes Proverbs as having an "almost social Darwinist worldview". So no wonder it appeals to those nasty Republicans.

Proverbs is the Republican part of the bible?I don't think Solomon had yet joined the GOP when he wrote the first 29 chapters of Proverbs. https://t.co/2bGhkGwoqH

(Although we should note, with Baden, that Proverbs is generally held to be a hodgepodge collection of ancient wisdom, and its connection to Solomon is not as simple as Rubio represents.)

■ But also see the rebuttal to Prof Baden from Tyler O'Neil of PJMedia, who notes a number of Proverbs that cut against the Social Darwinist claim. In addition:

Even accepting Baden's ridiculous premise that all Republicans are social Darwinists, was Barack Obama secretly a Republican when he quoted Proverbs 28:1 in his remarks at the National Peace Officers' Memorial on May 15, 2010? "The wicked flee when no man pursueth; but the righteous are as bold as a lion," Obama declared. Does this inspiring verse suggest social Darwinism?

Baden neglected to mention this quote, but he did admit former President Bill Clinton's reference to Proverbs 29:18 when accepting the Democratic Party nomination in 1992. "Where there is no vision, the people perish," Clinton quoted (neglecting the second half, "but he who keeps the law, happy is he").

O'Neil notes that Proverbs has 31 chapters, and many Christians read one chapter per day, based on the day number in the month, and that seems to be what Rubio is doing.

But not Pun Salad. Frankly, doing one verse per day is taxing.

■ But enough Bible study. Do you like art? If you do, then Kyle Smith at NR has some advice: If You Like Art, Don’t Take the Bechdel Test. What's that, you say?

Assuming you’re a normal person, and not a film critic, you may never even have heard of the Bechdel Test. Named for the lesbian cartoonist Alison Bechdel, it first appeared in an underground comic called Dykes to Watch Out For in 1985, in which it was called “the rule.” “The rule” is that a movie must have at least two (named) female characters who talk to each other about something other than a man. One Bechdel character sniffed that she would go only to movies that pass this test.

Smith (very entertaingly) notes (a) the arbitrariness of the test, and (b) a lot of good movies fail the test, a lot of bad movies pass.

I don't have a "Pun Salad Rule" for movies, but now I'm going to start working on one.

■ Scott Shackford at Reason asks the musical question: Do Americans Have a Right to Know If Their Government Is Incompetent?

Actually, all sentient Americans know that already. Scott means: do we have the right to know the details ASAP after any given incompetence occurs?

A new report put together by the staff of the Senate's Committee on Homeland Security and Governmental Affairs warns of an "avalanche" of leaks from President Donald Trump's administration. The report contends these leaks are threats to our country's safety and security, but we should be very wary about accepting such assertions given how little evidence the report provides.

Shackford notes that one leak describes the National Security Agency's responsibility for original authorship of security-breaching tools now used in various crimes. That's something the NSA would prefer us not to know, but (on the whole) we're better off knowing.