Pun Daughter thinks this is the best movie ever. And it was nominated for three Oscars (Best Picture, Best Supporting Actress, Best Adapted Screenplay). And (sorry), I'm like … meh.

It's the story of three African-American women working for NASA as "computers" in the early 60's, in Virginia's Langley Research Center, back when calculations were arduously chunked out on huge electomechanical contraptions. (Oddly, there's nary a slide rule in sight, I'm not sure how accurate that is.) Langley was, and is, in Hampton VA, in the deep southern, segregated, part of the state, and as you can imagine, that's an issue.

The primary focus is on Katherine Gobel Johnson (played by the great Taraji P. Henson), recognized as a math prodigy from a young age. Her efforts on calculating the trajectories of the early Mercury flights (Shepard, Grissom, Glenn) are covered.

Also Dorothy Vaughan (played by Oscar nominee Octavia Spencer), NASA's first African-American manager. Seeing the future was dim for human "computers", she taught herself FORTRAN, and then taught it to the ladies under her wing,

And, last but not least, Mary Jackson (played by Janelle Monáe), another whiz in math and science. She had aspirations (and qualifications) to be an engineer, but had to take some formal classes at the then-segregated Hampton High School. A dramatic courtroom scene in the movie, where she gets a judge to force her admission.

No question: the story of these women is interesting and dramatic. And it would make for a pretty good movie.

My main problem with the movie is that it badly trashes actual history in order to make a "good story". Although the movie explicitly places itself in 1961-1962, a lot of the stuff portrayed actually happened well before that. In one ludicrous scene, a gathering of Langley techs is lectured on the difference between suborbital trajectories (like Shepard's) and orbital trajectories (like Glenn's); that's something that would have never happened, since everyone, down to the NASA custodians, probably knew this already.

In one of the demonstrations of Katherine's genius, she's portrayed at figuring out a supposedly top-secret fact that the Redstone rocket was incapable of putting a Mercury capsule into orbit, and everyone's in awe. In fact this was well-known at the time. Like, even to ten-year-old kids. Me.

Shepard's flight is described by a TV news reporter as reaching "an altitude of 116 miles per hour" and would land "about 35 miles off the coast of Florida". Eesh! In fact, the flight had an apogee of about 116 miles, reached a speed of 5,180 mi/hr, and was recovered around 300 miles downrange from Cape Canaveral.

John Glenn was shown to demand that his re-entry trajectory be recomputed by the "smart one" (Katherine) on the day of his flight as more or less a sine qua non of him getting into the capsule. That would have been interesting, and the history is unclear, but there's no way Katherine could have done recalculation on the day of the flight as shown.

Glenn's flight is shown to be planned for seven orbits, but was abruptly cut short to three because of an anomalous reading showing the capsule's heat shield might have come loose. In fact, three orbits were always planned, although there was a lot of understandable concern about the heat sheild.

I may sound like a cranky quibbler, but (honestly) all this impaired my enjoyment of the movie. It's as if a movie about the American Revolution climaxed with a dramatic horseback swordfight between Generals Washington and Cornwallis, after Cornwallis had killed George's best buddy, the Marquis de Lafayette. ("Marie-Joseph Paul Yves Roch Gilbert! Nooooo!") 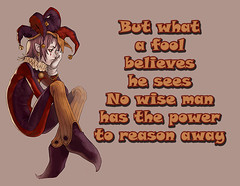 9 Do not speak to fools,
for they will scorn your prudent words.

OK. Today's Flickr embed is (frankly) a better version of the proverb, from the Doobie Brothers.

In April, researchers announced they had managed to keep several extremely premature lambs alive and growing in artificial wombs. After spending up to four weeks in a clear plastic "extra-uterine device" at the Children's Hospital of Philadelphia, each sheep transformed from a decidedly undercooked fetal specimen to a much more robust critter with long limbs and a fluffy wool coat, the sort of animal you wouldn't be terribly alarmed to see plop to the ground in a field on a spring afternoon.

And, yes, the plan is to, eventually, use the technology on humans. And, as Ms. Mangu-Ward notes, those lambikins are "already taking sledgehammers to some of the most precarious coalitions in American politics."

■ At Power Line, John Hinderaker notices that It’s True: Liberals Hate Western Civilization. And it's a fine compilation of unhinged Progressive responses to President Trump's recent speech in Warsaw. For example, Sarah Wildman at Vox, deemed it an "alt-right manifesto”:

In his address, Trump cast the West, including the United States and Europe, on the side of “civilization.” With an undercurrent of bellicosity, he spoke of protecting borders, casting himself as a defender not just of territory but of Western “values.” And, using the phrase he had avoided on his trip to Saudi Arabia, he insisted that in the fight against “radical Islamic terrorism,” the West “will prevail.”

Hinderaker comments: "Is this what is meant by 'alt-right'? I am so old, I can remember when 95% of Americans would have thought that such propositions verged on the self-evident."

As Arnold Kling notes, Trump is speaking a language that Progressives do not (and, largely, do not want to) understand.

■ I don't link to Jay Nordlinger as much as I should. Over at NRO, they're having a Trump-speech-inspired discussion of Western Civ, Universalism, and so on. In America, the West, and the Rest Nordlinger makes an interesting observation:

Some years ago, I was talking with a Falun Gong practitioner — a member of a group that has been persecuted by the Chinese Communist Party. There are all too credible reports of organ harvesting, for instance.

This man said, “The government is always saying that Falun Gong is foreign to China. But the truth is, Falun Gong has deep roots in China: our history, our culture. You know what’s a foreign imposition? Communism. Marxism-Leninism. It came from you guys, in the West! It was imposed on us in the 1940s, and it is utterly alien to Chinese culture. For instance, we have always placed great importance on the family. It was always the center of our lives. Then came this one-child policy.”

Ouch. Like many good points, that one stings a little.