… will hold you as it did by the lake on Naboo so long ago.

Number 11 in C. J. Box's continuing adventures of Joe Pickett, now returned to his dream job, Game Warden in the Saddlestring District of Wyoming. Daughter Sheridan is decamping for the University of Wyoming, which is causing Joe some angst, because his other two daughters have "special qualities" that set his teeth on edge.

Joe's mother-in-law Missy has been a recurring pain-in-the-butt character in previous books; she has a habit of "marrying up", and she's now on Husband Five. Who's very rich, but also, right in Chapter One, also very dead. Joe finds him swinging from the blade of one of the hundred wind turbines he's installed on his acreage, not all acquired honestly. And number one suspect is Missy. That can't be true! Or can it? Ordinarily, that wouldn't be a game warden's business, but the family connection causes him to investigate, to the chagrin of many of the normal law enforcement folks.

Meanwhile Joe's sometime-friend, Nate Romanowski is being stalked by a woman bent on revenge. She hires two idiots to do the dirty work; they bungle the job, but there is collateral damage that hurts Nate to his core. He's soon enough on the track as well, and there turns out to be a surprising connection between his quest and Joe's.

Is it good? Heck yes. Another can't-put-it-downer.

I've seen the author, Baylen Linnekin, both at the Reason website and magazine, writing a lot of sense about American food policies. So I requested this book from the Interlibrary Loan service of the University Near Here, and it showed up all the way from the University of Wyoming. Thanks as always to everyone involved.

There is a general long-running libertarian critique of government regulation: it is born out of the early-1900's Progressive/Fascist mindset that the State Knows Best, and that via mandates, rules, taxes on some, subsidies for others, the anarchy of the free marketplace could be tamed into a smooth-running machine free of "wasteful" competition.

Linnekin does a great job, anecdote by anecdote, of demonstrating how this plays out in getting food into the American mouth. Current rules damage both farmers and consumers.

For example, in the name of "food safety", many regulations mandate processes, not results. (E.g., demanding that small vendors refrigerate their products, not simply use ice.) On the margin, the compliance costs are often too great for the "little guys", driving them out of business.

And on. And on. Most importantly for current debates, Linnekin shows how a ton of regulations actually encourage (and in some cases, demand) massive amounts of food waste. As pointed out on the Drawdown List of Solutions to greenhouse gas emissions, number three in terms of efficacy is "Reduce Food Waste". There's little reason to not yank the rules that get in the way of that goal.

Linnekin's approach is occasionally outright libertarian: as long as willing producers and willing consumers can agree on a price, free of fraud or misrepresentation, let the market do its work. Regulators go home. But it's clear that he wants to appeal to a broader audience that us hardcore types. One side effect is right up there in the subtitle: he leans heavily on the foodie buzzword "sustainable". That got mildly irritating after the first nine dozen repetitions. To his credit, he's clear that his definition of "sustainable" is more economic than sentimental: efficient processes, discovered through market processes.

Another irritation, also seen in the book's subtitle: Linnekin notes strongly that he's not against all rules, but they should be "smart". This is eye-rolling for me. Who's against "smart"? 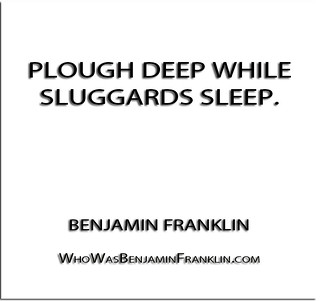 ■ We wind up Chapter 24 of Proverbs with a five-verse extravaganza. Ladies and gents, turn your attention to Proverbs 24:30-34:

30 I went past the field of a sluggard,
past the vineyard of someone who has no sense;
31 thorns had come up everywhere,
the ground was covered with weeds,
and the stone wall was in ruins.
32 I applied my heart to what I observed
and learned a lesson from what I saw:
33 A little sleep, a little slumber,
a little folding of the hands to rest—
34 and poverty will come on you like a thief
and scarcity like an armed man.

Chapter 24 was kind of a cut-and-paste job, with no overall theme or internal logic, and the quality was uneven. But this is kind of moving. Although I'm not sure how the Proverbian jumps from the fact that his countryman was a "sluggard" with "no sense" to his overall conclusion that your prosperity can be wrecked by a few moments of inattention. Still.

Our photo embed du jour is from Ben Franklin, with more or less the same idea.

■ A painful, but probably worthwhile debate at National Review between John McWhorter and Robert VerBruggen. First, Professor McWhorter urges us to Stop Obsessing Over Race and IQ.

Is the issue of whether IQ differs innately between races as unequivocally settled as that of whether genocide is okay? If not, does it fit into the class of things that ought to be up for discussion? In fact, I suggest that race and IQ is an exceptional topic, in the literal sense. The data are not all in, yet I see no value in including this topic in our liberal-arts discussions. Certainly scientists will research the topic and will share their findings, which will always be available online for those interested. However, those aggrieved that this particular issue is not aired more widely in general discussion need to make their premises clearer — upon which, I suggest, those premises will seem less convincing than they are aware.

And the counterpoint from VerBruggen is here: Why I Write about Race and IQ

[…] I rather doubt that an effort to further stigmatize the discussion of race and IQ could have more than a minor effect on how often people actually discuss it. And even if people did stop discussing it openly, I suspect many would still become curious about the topic and research it online, where people feel considerably freer to explore the taboo. This subject sits at the nexus of numerous others that are inherently interesting, for perfectly legitimate reasons. How did evolution shape humanity as a whole, and to what extent did it shape different populations differently? Why do we have such stark inequality among different groups of people, and not just blacks and whites in the U.S.?

I think that VerBruggen has the better argument here, but both writers make excellent and thoughtful points.

We're fickle about entrepreneurs, at least if they actually become successful. Whether or not they add value to society is beside the point.

When they're handsome and charismatic entrepreneurs are "innovators" and "game changers." They get invited to sex parties in Davos. If they're homely or awkward, they are merely wealthy drivers of inequality, and thus, evil.

That's because our culture simultaneously hates rich people but loves celebrities. When entrepreneurs manage to become celebrities, they are exempted from socialist tirades.

A helpful Venn diagram is included at the link. Heaton is, among other things, a professional comedian. Don't let that dissuade you.

■ Philip Greenspun went to to the Aero Club of New England‘s annual Cabot Award luncheon, where the honoree was Harrison Ford. You know, the actor? And the famously irascible Mr. Ford had interesting things to say, recounted here: Harrison Ford on flying and freedom. Phil's favorite bit:

Looking back at Mr. Ford's movies, it's tough to pick a favorite. He's been great in his iconic roles, but I'll watch The Fugitive just about anytime.